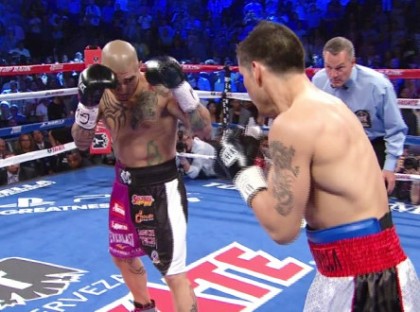 By B.G.B: Oscar Dela Hoya is evidently ecstatic about the likely match up between Saul Canelo Alvarez and Miguel Cotto. In fact, Dela Hoya is so excited that he has gone as far as to say that it is a fight that fans would rather witness than the super-mega fight between the two best fighters of a generation; Manny Pacquiao and Floyd Mayweather Jr.

Although a fight between Cotto and Alvarez would be a big fight in terms of PPV, Dela Hoya’s statement is utterly absurd and inaccurate. What planet is Dela Hoya living on if he truly stands by that statement?

On paper a Cotto-Canelo fight would undoubtedly provide excitement. Both are comfortable inside, they like to engage and both dislike fighters with movement. Lucky for them they wont need to chase very hard in order to engage with one another. They will trade throughout the entirety of this fight and it is very likely to end in a stoppage. So why be so pessimistic? One reason; this is a one sided bout.

Yes, both will land. Yes, they will go toe to toe. Yes, there will be knockdowns. But having assessed both fighters attributes at this stage of their careers, (Cotto fans may not want to hear this) Canelo wins this fight hands down. As stated earlier, this fight would provide excitement and entertainment, much in the same way Golovkin impresses, or a young Manny Pacquiao perhaps. But there is no doubt in my mind that Saul Alvarez beats Miguel Cotto inside the distance in a one-sided fight.

Alvarez is coming off a very difficult match-up against the much avoided Erislandy Lara. The fight was close and the decision is still debated, however Alvarez emerged the victor in a fight in which he was strongly advised not to take. There is no denying Lara’s movement caused Canelo problems, but Canelo’s own body work and power caused Lara problems. Lara’s refusal to engage in any of the exchanges was perhaps the reason why he lost the fight. Lara at times seemed to be running and letting the control of the fight slip away. His early work was much more effective when he was landing consistently but his work rate dropped and gave Canelo the opportunity to win rounds. Whether you agree with the decision or not the fight was an interesting and close match. What did Alvarez showcase in this fight? He demonstrated his ability to throw body shots with power in order to slow a very good, fast fighter down. He also demonstrated his potential to adapt to Lara, something which he failed to do against Mayweather Jr. Taking this into account it can be argued that Alvarez is a better fighter than he was when he fought Mayweather and lost convincingly. Alvarez has gained 24 rounds experience, 12 of which were against the best technical boxer on the planet and the other 12 against Lara who is without a doubt one of the best movers in the light middleweight division and perhaps in boxing altogether. That is not good news for Cotto.

Miguel Cotto is coming off a somewhat surprising victory against Sergio Martinez. The result may not have surprised many, but the fashion in which Cotto battered Martinez from the first bell could not have been expected. However it does not take a genius to realize Martinez is far from what he was when he ruled the division. He was dropped twice by Martin Murray in a fight that was too close for comfort to say the least. Murray may have been the bigger man but he is not recognized for his power and does not have a high KO%. Martinez looked fragile in that fight and was ready for the taking. Cotto took his chance at the right time. However that victory is not nearly enough to suggest Cotto will beat a younger, bigger, faster more powerful opponent than himself in Alvarez. Cotto also fought Mayweather and perhaps had slightly more success than Alvarez. However, in all honesty I feel Mayweather could have easily stopped Cotto in the later rounds but chose not to. Since the Mayweather fight Cotto was again out-boxed by Austin Trout, another good boxer that was beaten by Alvarez. After Mayweather, Alvarez to me has become a better fighter whereas Cotto has stayed the same or may have even gotten worse.

The intentions of this article is not to glorify Alvarez as invincible or discredit Cotto as useless. However when matching up the attributes of both fighters I only see one outcome. They will trade and Cotto will crumble in a similar fashion as he did against Margarito. Alvarez possesses a very good shot selection and rhythm to his power shots. Cotto can be KO’d and dominated by aggressive fighters as seen in the past. Dela Hoya cannot be serious if he thinks this match-up is as interesting as the fight that all fight fans cannot stop mentioning despite its never ending nonsense. Cinco De Mayo is this fights saving grace. The nationality’s of both fighters makes this a mega fight when in reality it will be a one-sided beating. If Alvarez does not fight Golovkin after then the match-up with Cotto will have absolutely no significance. He is not the best middleweight in the world. He may have a world title but I can say with confidence that Canelo, Golovkin, Andrade and Lara all beat Cotto. Fans may disagree which is what makes this sport so engaging. We can never truly know the outcome of a fight. All we can do is assess and having done so I feel that this fight is not nearly as interesting as it may seem. Sorry Oscar but this match-up is an undercard compared to Mayweather-Pacquiao.

Bernard Hopkins: Will the curtain of his career fall on Nov 8th? »