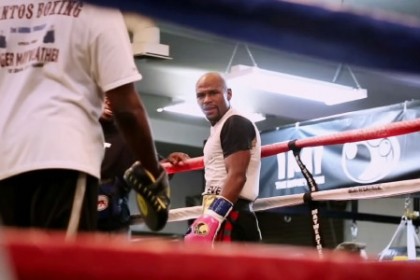 By Yannis Mihanos: WBA/WBC welterweight champion Floyd Mayweather Jr has fought well against all the aggressors that has been up to during his boxing career: Jose Luis Castillo, Juan Manuel Marquez, Miguel Cotto, Saul “Canelo” Alvarez, Robert Guerrero, Marcos Maidana, Ricky Hatton and the list goes on (47 in total).

Styles make the fights as very well they say and Mayweather has followed this rule to the letter and so far he has very much succeeded.

In his fights aggressors have done all the fighting and he has done all the defending and talking. He has achieved the perfect combination.

His latest opponent Marcos Maidana did all that he could with whatever he had available but clearly in the 2nd fight fell short of the expectations.

Mayweather proved just too big for his teeth. During the fight I could hear trainer Robert Garcia desperately shouting at Maidana, telling him to “Jab, jab, attack,” but with no effect whatsoever. It was easier said than done. Maidana couldn’t find the target at the rate that he wished he could.

That to me has been the story so far for every opponent that Mayweather has faced. No one has really found or exposed a weakness to such degree so he can win the fight.

You can say that his opponents were not strong enough, young enough, old enough, fast enough, talented enough, smart enough, or hungry enough. Either way, the results stand as they are.

Floyd is still at the top.

So the blueprint on how to beat boxing’s number 1 pound for pound remains on hold for at least 2 more fights.

Another thing that someone might notice is that the frequency of his fights through all these years have not been that great for Mayweather. He’s fought a maximum 2 fights per year: 47 fights in 18 years. Other top fighters in the past had competed much more and so they couldn’t stay always unbeaten. They paid the price.

But Mayweather understood early that is not about fighting excessively that makes you the best. He fought smart and has been successful so far.

Everybody expects one of the 2 fights remaining on his contract if not both to be against arch rival Manny Pacquiao.

That I think would be a fitting end to his career if of course he is willing to take the risk.

« How Keith Thurman Gets His Big Fight

Mayweather: Pacquiao hasn’t had a knockout since Alex Ariza left »