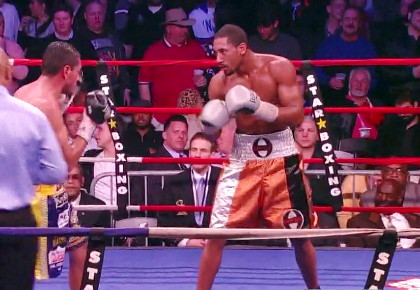 By Allan Fox: WBO junior middleweight champion Demetrius Andrade (21-0, 14 KOs) will be defending his title against unbeaten #2 IBF, #2 WBO, #3 WBC Jermell Charlo (24-0, 11 KOs) on December 13th at the Mandalay Bay in Las Vegas, according to Dan Rafael of ESPN. The Andrade-Charlo fight will be televised on Showtime.

This is a tough night for Showtime to be televising the Andrade vs. Charlo fight, because HBO will have former two division world champion Timothy Bradley facing Diego Chaves on the same night in a fight that will take place in Las Vegas, Nevada.

Andrade briefly was set to face Matt Korobov for the vacant WBO middleweight title, but then Andrade opted to stay at 154 due to the money not being good for the Korobov fight.
Charlo, 5’11”, will be a tough opponent for Andrade because Charlo has looked impressive in beating guys like Gabriel Rosado, Charlie Ota, Jose Angel Rodriguez, Demetrius Hopkins, Harry Joe Yorgey and Dashon Johnson. However, Andrade is a big step up from the fighters that Charlo has been fighting and it might be too big of a step up.

Andade, 6’1”, is bigger and stronger than Charlo and he has a better jab. It’s going to make it really tough on Charlo to try and overcome the size of Andrade. Charlo struggled to defeat Hopkins, and he barely got past him.

Andrade is a lot tougher than Hopkins though, and it might be too big of a step up for Charlo at this early point in his career. Charlo would be better off going after IBF champion Carlos Molina than a guy like Andrade.

Andrade stopped Brian Rose in the 7th round in his last fight in June of this year. It was a one-sided fight with Andrade knocking Rose down twice before the fight was eventually halted in the 7th round. In his fight before that, Andrade defeated Vanes Martirosyan by a 12 round split decision last year in November.

« Mayweather: Pacquiao hasn’t had a knockout since Alex Ariza left

Saunders: I’ll retire from boxing if I lose to Chris Eubank Jr »