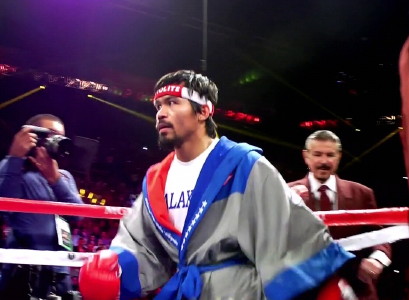 By Chris Williams: Trainer Robert Garcia believes that the recent twitter sparring that has been going on back and forth between Floyd Mayweather Jr and Manny Pacquiao could be the beginning of them working on a fight together for next year.

Mayweather’s hiring of former Pacquiao strength and conditioning coach Alex Ariza is further evidence in Garcia’s mind that Mayweather will be looking to face the 35-year-old Pacquiao in 2015.

“I think that could be the beginning of them working on the fight,” Garcia said to esnewsreporting.com. “If they’re going back and forth that could probably say something. If you ask me I think that’s a fight that probably won’t happen, but if they’re going back and forth there’s a possibility. They’re already talking. They’re building it up. He [Mayweather] brought in Ariza. When you bring things together, it makes a little bit of sense.”

I disagree with Garcia about Mayweather’s reasons for hiring Ariza. I think Mayweather hired Ariza because he sees him as a good trainer. He did a great job with Pacquiao and he helped out both Brandon Rios and Marcos Maidana in the past. Without Ariza, both of them looked poor in their last fights, and Pacquiao hasn’t looked anything like the fighter he was when he was working with Ariza and going hard on his strength regimen.

Mayweather was smart enough to realize that the brains behind the success of those fighters was Ariza in building up their bodies to make them stronger fighters than they were in the past. Mayweather is smart to hire an excellent coach like Ariza. It’s those fighter’s loss that they no longer have Ariza working with them.

“I would think that Mayweather wouldn’t do it and neither would Pacquiao,” Garcia said. “They have too much pride, but [expletive] it. Both of them are going towards the end of their careers so why not pick up $50 million dollars in one fight. That would be big, and they’re going back and forth and bringing in Ariza. It’s not like Mayweather needs Ariza or ever needed him. To sell it, it makes a lot of sense. It’s an interesting fight.”

Mayweather and Pacquiao would likely make a lot more than just $50 million in a fight between them unless the boxing public has lost interest in that fight. I wouldn’t be surprised if Mayweather made $80 million for a Pacquiao fight with Pacquiao making somewhere along the lines of $60 million.

It’s a fight that would give Pacquiao a payday that he’d have to fight three times to earn. It would be huge money and it would likely set him up nicely for retirement.

“I don’t know who wins. I would probably pick Mayweather to win,” Garcia said. “But Pacquiao is awkward, very fast. To prepare my fighters to fight, I think Pacquiao is a lot more difficult. He’s too fast, he moves from one side to another. He’s got power, Mayweather doesn’t. I think Pacquiao’s more difficult, but Mayweather doesn’t have to do much. He throws one punch at a time, he’s got very good defense, so I would probably pick Mayweather to win. But Pacquiao’s got a shot. Pacquiao is fast, he’s too awkward, and he’s very different. There’s no one to prepare for to spare that fights like Pacquiao.”

« Cleverly: This time I’m knocking Bellew out in front of his own fans

Mayweather will play it safe in his next two fights, says Campbell »