Odlanier Solis vs. Tony Thompson 2 in the works for October 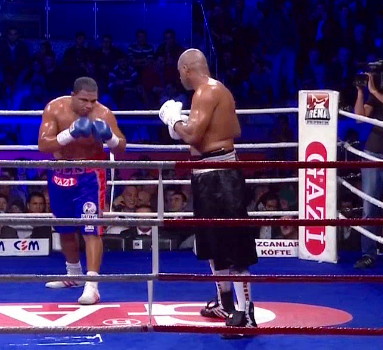 The two fighters faced each other last March with Thompson pounding out a 12 split decision at the Atatürk Spor Salonu, Tekirdag, Turkey. Thompson clearly won the fight and deserved a unanimous decision rather than a split decision. He simply outworked the chunky 257 pound Solis.

The exact date and venue of the Solis-Thompson II fight is still being worked out at this time, but it wouldn’t be surprising if it winds up in Turkey again.
The winner of the rematch between the two fighters will keep their faint hopes for a world title shot in the future if they keep winning or if they get picked out by one of the champions in a voluntary defense, which isn’t too likely.

“The contracts are signed, we’re ready to go”, said Solis’ promoter Ahmet Oner. “Now Solis has to show what he’s made of. I am sure that he can beat Thompson. But their first bout showed that he needs the right attitude and a lot of stamina to do so. This is the last chance for both men. It’s do or die. After beating Solis, Thompson lost to Carlos Takam. Still both men are rated in the WBC top 15. So the winner can move up the rating and get in line for another world title shot – the loser should probably just retire.”

Thompson is coming off of a 12 round unanimous decision loss to Carlos Takam last June. Thompson had problems with the constant pressure and high work rate of Takam. The Takam fought, he would have beaten Solis with ease as well. Takam is fighting at a high level right now, and he’s give most of the top 15 heavyweights huge problems.

As chunky and stamina plagued as Solis looked in their fight last March, it’s doubtful that he’ll be able to avenge his loss to Thompson in the rematch. The 6’5″ southpaw Thompson is too big for Solis and he throws too many punches for him to beat him now. If this was the trim 200 pound version of Solis that won an Olympic gold medal in the 2004 Olympic for Cuba, he’d easily beat Thompson even in giving away 60 pounds of weight. Solis was an incredible amateur. But after he turned pro, he got really, really fat and he stayed fat, and that unfortunately has kept him from being successful. Solis is really a cruiserweight carrying around close to 50 pounds of excess weight.

The heavyweights: Where would they be now: Part 2/3 »