Where does Miguel Cotto and Sergio Martinez go now ? 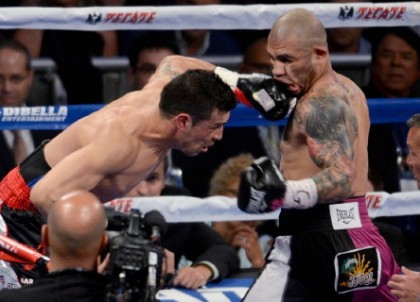 (Photo credit: Naoki Fakuda) By Cameron Gillon: After beating the odds last Saturday night at MSG in New York against the WBC and Ring Magazine Middleweight champion Sergio Martinez (51-3-2, 28 KO’s), the question now is where does Miguel Cotto (39-4, 32 KO’s) go now and who should he fight in his next bout? I was one of the people that thought Sergio Martinez would emerge victorious last night but obviously I was wrong.

I thought Cotto wouldn’t have enough to beat Sergio, but how he proved me and the other Martinez fans wrong. He controlled the fight from the first punch landed, and no one would of expected him to put Martinez down three times in the 1st round. From then on Martinez was a sitting duck, his legs had gone from the first knockdown and Cotto knew that, and to Sergio Martinez’s credit, he stuck in there and put a hell of a effort up to win the fight despite being in a terrible state.

In my opinion, Miguel Cotto should fight another big fighter next. He can fight whoever he wants now, plenty of names have been thrown out into the mix, pound for pound king Floyd ‘Money’ Mayweather has been the biggest. A potential rematch between these two after Cotto’s win last night would certainly draw big numbers in pay-per-view. Another was the young Mexican fighter Saul ‘Canelo’ Alvarez who of course has to beat slick Erislandy Lara next month first in their fight on July 12th, but I’m sure Oscar De La Hoya could put Alvarez in against Cotto even with a loss against Lara. Another rematch against Manny Pacquiao has been spoke about, but with trainer Freddie Roach training both Cotto and Pacquiao that is unlikely to happen.

What does everyone else think?

Sergio Martinez, no one can argue that he has the power still to be effective if he chooses to continue his boxing career.