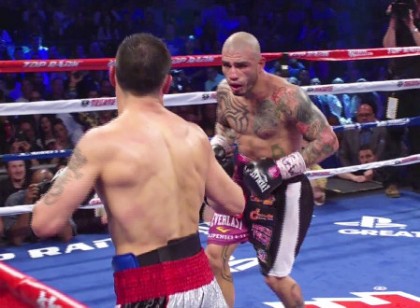 By Dan Ambrose: The results from this months’ HBO pay-per-view fight between former WBC middleweight champion Sergio Martinez (51-3-2, 28 KO’s) and Miguel Cotto (39-4, 32 KO’s) are in and they’re not good. According to Dan Rafael, the Cotto-Martinez fight brought in just 350,000 PPV buys on HBO, well below the projected 475,000 buys that it was estimated to pull in.

The fight still made a profit, but it was a slim one and not the cash windfall that the promoters of the event Bob Arum and Lou Dibella thought it would be. Arum blames the poor PPV results on fan fatigue from having to purchase too many PPV events. Arum feels that the Cotto vs. Martinez fight was merely a good one, and not a great one designed for PPV. Dibella, for his part, blames the low PPV figures on fans having competing interests with horse racing event at the Belmont Stakes and Los Angeles Kings vs. New York Rangers Stanley Cup finals taking place.

“Pay-per-view was always designed, as was closed circuit back in the day, for true super fights, not just very good fights,” Arum told Dan Rafael at ESPN. There have been pay-per-views every month and people resent the fact that they’re asked to pay extra for anything halfway decent. Boxing pay-per-view numbers are down. Look at the (recent) numbers for the (Floyd) Mayweather and (Manny) Pacquiao fights. The UFC pay-per-view numbers are also down.”

I kind of doubt that boxing fans were pulled in by the Stanley Cup finals. I think it’s more likely the case that the fans didn’t see the Cotto-Martinez fight being worthy of PPV. Look at the facts: Cotto came into the fight having lost 2 out of his last 3 fights. To ask boxing fans to pay to see a fighter who’d lost recently to both Austin Trout and Floyd Mayweather Jr was really testing the loyalty of fans.

It was asking fans to purchase the fight based on what Cotto was in the past and not what he’d been in the last couple of years. Obviously, the boxing fans showed what they thought of the idea of paying to see Cotto fight. Additionally, Martinez, 39, hadn’t fought in over a year, and he’d not looked good in his last fight against Martin Murray. Sergio never really was a PPV fighter. The one PPV fight he was involved with was against Julio Cesar Chavez Jr in 2012, and that fight did well but that was largely due to Chavez Jr’s popularity, not Martinez’s.

The PPV numbers for Mayweather and Pacquiao’s fights were down recently, but that wasn’t because of fan fatigue. It was because fans didn’t like the idea of paying their hard earned money to see Pacquiao fight Brandon Rios and Tim Bradley. Those aren’t popular fighters, and Arum should have realized that before he made those fights. Mayweather’s PPV numbers for his fight against Maidana still haven’t been officially announced, but it’s clear that Maidana wasn’t a popular fighter either. Asking fans to pay to see Mayweather fight a guy that isn’t very popular was asking for trouble.

Arum doesn’t seem to be bothered by the low PPV numbers for Cotto’s fight, because he plans on matching Cotto vs. Bradley last this year in December on HBO PPV. This is not a PPV worthy fight. As long as Arum has a realistic view of how few fans will be interested in paying to see Cotto fight Bradley, who lost his last fight to Manny Pacquiao, then he should be okay. A Cotto-Bradley fight will likely bring in around 250,000 to 350,000 PPV buys, but no more than that. It’s a mistake on Arum’s part to match Cotto against Bradley in the first place, but then to make it a PPV fight, he’s just asking for disappointment.

A Cotto vs. Bradley fight would have been a halfway decent fight if it had taken place following Bradley’s controversial win over Pacquiao in 2012. But since then, Bradley has a less than impressive win over Ruslan Provodnikov followed by a loss to Pacquiao. Asking fans to pay to see Cotto fight Bradley at this point in Bradley’s career is arguably a huge overreach on Arum’s part. You never want to set up PPV fights where one of the fighters is coming off of a one-sided loss the way Bradley did in his recent defeat at the hands of Pacquiao.