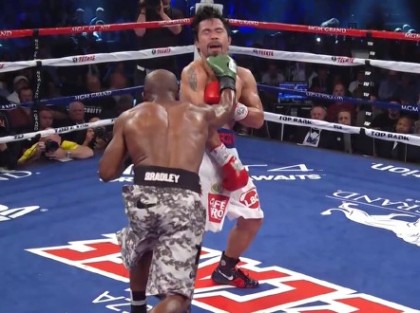 By Chris Williams: Bob Arum of Top Rank has finally come out to give a pay-per-view number for Manny Pacquiao’s rematch against WBO welterweight champion Tim Bradley (31-1, 12 KO’s) last month on April 12th at the MGM Grand in Las Vegas, Nevada. The numbers aren’t good in terms of the huge 1 million PPV buy fights that Pacquiao enjoyed in years gone by. Arum is saying that the Pacquaio-Bradley 2 rematch brought in between “750,000 and 800,000” PPV buys, according to Dan Rafael of ESPN. There wasn’t an exact number given by Arum, and HBO hasn’t released the numbers themselves for some reason.

Arum feels that the fight would have done over 1 million buys if a Mexican fighter like Juan Manuel Marquez had been the one facing Pacquiao instead of Bradley. Arum doesn’t say why the last Pacquiao-Marquez fight didn’t reach 1 million or for how much longer Marquez will keep being matched against Pacquiao. They’ve already fought 4 times, and there are a lot of fans tired of seeing Arum match Pacquiao up with Marquez over and over again, especially now that Marquez is in his 40s and clearly not the same fighter he once was.

Pacquiao’s fight against Brandon Rios brought in 475,000 PPV buys last November in a fight that was staged in Macao, China. That’s fight that would have done poorly no matter where they staged it, but Arum believes that it did badly in part because of the fight taking place outside of the United States. It obviously doesn’t help when Arum matches Pacquiao up against guys that are coming off of a loss like Rios was in losing his previous fight against Mike Alvarado. How can you get excited about a fight between Pacquiao and a fighter who was soundly beaten in his previous fight? Arum made that same mistake of matching Pacquiao against Joshua Clottey in 2010. Clottey had been beaten in his previous fight by Miguel Cotto, but Arum went ahead and matched Pacquiao against Clottey anyway and the PPV numbers were disappointing.

“Having future fights in Macau makes so much sense because we can do huge site fees and we want to launch pay-per-view in China. We couldn’t get it running for the Rios fight but we will, and then, between that and the site feel, we won’t be so reliant on the pay-per-view in the United States.”

That sounds all well and good, but if they fail to launch the PPV in China for Pacquiao’s next fight, he could wind up with far less PPV buys, if what Arum says is correct about the fights doing less PPV numbers when outside of the U.S. Pacquiao should probably only fight in Macau if his fights over there will be PPV in China. If not, it doesn’t seem to be worth it for him to go over there. I’m sure that Arum will monetize the fights in China at some point, but Pacquiao doesn’t have that much time left in his career. His contract with Top Rank ends this year. If he re-signs with them, the only real possibilities for big fights will be if Pacquiao faces the bigger fighters like Sergio Martinez and Miguel Cotto. Other than that, Pacquiao will likely continue to fight Marquez and Bradley. Fights against Ruslan Provodnikov, Jessie Vargas and Rios won’t bring in big PPV numbers, but it’s likely that Pacquiao will end up facing those guys.

If Arum is able to open up China for PPV, then I can see Pacquiao making a huge amount of money against any fighter that Arum chooses to match him up again. In that case, I wouldn’t be surprised if Pacquiao hangs around for another 5-7 more years to scoop up the big money from China. Arum could probably get away with matching Pacquiao against the likes of Rios over and over, and the fights will still bring in huge money in China. The U.S PPV won’t even matter at that point due to the huge PPV numbers his fights would do in China.

« Manny Pacquiao has no chance against Floyd Mayweather Jr.

The WBC has missed a trick with Arreola vs. Stiverne 2 »