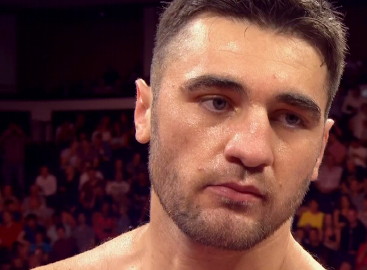 By Scott Gilfoid: WBC International featherweight champion Lee Selby (19-1, 7 KO’s) defeated WBC #15 fringe contender Romulo Koasicha (21-4, 12 KO’s) by a tougher than expected 12 round unanimous decision on Saturday night at the Motorpoint Arena, Cardiff, Wales, United Kingdom. The final judges scores were 119-109, 119-109 and 119-110. Selby was stunned by a left hook by Koasicha in the 8th round, and he ended up with a swollen right eye from Koasicha’s left hooks.

There’s no other way of looking at this fight other than seeing it as a disappointing performance for Selby, as he struggled in the first three rounds when Koasicha, who is far from a big puncher, was putting pressure on Selby and walking him down. Koasicha was the bigger puncher, and he was nailing Selby with some good shots in the early going. After the 3rd, Koasicha stopped throwing as many punches, and he basically gave away the remainder of the fight by failing to go after Selby the way he needed to.

After the fight, Selby’s promoter Eddie Hearn said “We’d like [Jayson] Velez in a final eliminator. He’s in the deep end now. There’s no easy fights. He’s ready to take a big step up. One tough fight and then fight for the title.”

Sadly, Koasicha was a big step up for Selby from the poor opposition he’s been facing and he did not look good, as I mentioned. Selby doesn’t look ready for Velez and if that fight is made, I see Selby running for his life like he was in the first three rounds tonight against Koasicha. And in no way is Selby ready for a title shot against WBC featherweight champion Jhonny Gonzalez. Selby doesn’t have the power to keep a slugger like Gonzalez off of him, and if a fighter with moderate power like Koasicha was able to hurt him just imagine what guys like Gonzalez and Velez will do to him.

The shot had Corbin out on his feet. Cleverly then took his time in placing his punches well until the referee decided to stop the fight with Corbin still standing but looking well shaken.

In fairness to Corbin, he really isn’t a big cruiserweight, and he doesn’t have the speed, power or the work rate of the much better cruiserweights in the division. He was just a tuneup for Cleverly, and nowhere near the talent of the guys that Cleverly will be facing in the future.

Cleverly said after the fight, “One or two more and then me and the big man [Tony Bellew] will get it on. The boxing public wants to see grudge matches. We’re going to set it up properly. Once it happens, it’ll be big.”

“There was no clear winner in that fight,” Bellew said about his defeat to Cleverly three years ago. “Next time judges won’t be needed. I’m going to do worse than Kovalev. When I hit people, I hurt them. I’m going to do worse in November. He needs confidence builders, I don’t.” Bellew went onto say that his opponent Valery Brudov was a much better fighter than Corbin, which kind of goes without saying. Bellew kind of worked up a lather in speaking about Cleverly.

It was kind of funny really, because Bellew was on the verge of being knocked out in his cruiserweight debut by 37-year-old Brudov in his last fight. To be sure, Bellew got the stoppage in the 12th round, but the fact that he got pretty well beaten up and almost stopped by a non relevant cruiserweight like Brudov, it showed pretty clearly that Bellew is going to have a tough time trying to do anything in the cruiderweight division other than hang around as a gate keeper.

Super middleweight prospect Callum Smith (11-0, 9 KO’s) destroyed an overmatched Tobias Webb (14-2-1, 2 KO’s) by a 2nd round knockout. Smith, 24, knocked Webb down four times in the 2nd round with body shots. Smith put him down three times with lefts to the body and once with a right.

In winning the fight, the 6’3″ Smith retains his WBC International super middleweight title. Despite winning the fight, Smith had problems with the light hitting Webb in the 1st round in getting nailed by a lot of jabs, and a number of power shots. Smith ended up with slight redness under his right eye. Had Webb a little more power, I think he would have had a chance to score an upset.

Smith reminds me a lot of Andy Lee, and I’m not sure how far he can go because he’s mainly just a body puncher. Body punchers do well against a certain amount of fighters, but once they get put in with opposition that can handle body shots, they’re pretty much lost. Once Smith faces someone that can neutralize his body punching, he’ll struggle.

“I think we need to move him up to a top 20 or top 15 rankings,” Smith’s promoter Eddie Hearn said after the fight.

#3 WBO super middleweight contender Paul Smith (35-3, 20 KO’s) defeated David Sarabia (7-4-2, 2 KO’s) by a 2nd round TKO. Smith flurried on Sarabia until the referee stopped the fight with Sarabia still on his feet. This was such a mismatch in terms of skills between the two fighters, and it just makes you wonder what they were thinking of in putting together a terrible mismatch like this.

Smith will now likely be facing WBO super middleweight champion Arthur Abraham next if Hearn can put the fight together. Smith said this about Abraham “He’s not what he was at middleweight. He’s had a lot of hard fights.”

Former WBA light welterweight champion Gavin Rees (38-4-1, 18 KO’s) defeated Gary Buckland (28-3, 9 KO’s) by a 12 round split decision in Rees; last fight of his career. The final judges decision was 117-113, 117-112 for Rees, and 116-113 for Buckland. Earlier in the fight, the bigger and younger Buckland got the better of Rees with his higher work rate and size. But once Rees warmed up and got relaxed, he was able to outbox Buckland the rest of the way.

Buckland looked tire in the last three rounds of the fight, as the pace that Rees set out was a difficult one for him. Buckland wasted a lot of energy with missed punches, and this seemed to take a toll on Buckland. Rees suffered a bloody nose in the 4th, and was cut over his left eye in the 11th.

« Mayweather-Maidana PPV numbers in 800-900 K range, according to Rafael’s sources

Top Rank/WBO vs Golden Boy/WBC: Are Sanctioning Bodies Dragged into the Cold War »