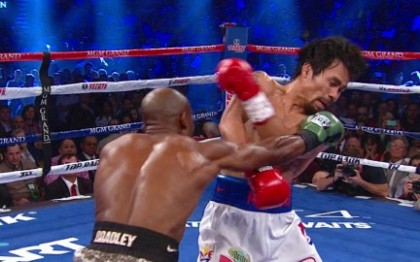 By Chris Williams: It looks like Bob Arum’s idea of matching Manny Pacquiao (56-5-2, 38 KO’s) back up with Tim Bradley (31-1, 12 KO’s) wasn’t a good one after all, as Dan Rafael of ESPN is reporting that the gate numbers for the fight were the lowest for Pacquiao in his last 8 fights in Las Vegas, Nevada.

As far as the pay-per-view numbers go, HBO didn’t release them yet because Arum is out of the United States right now on a trip, otherwise those numbers would be out. The timing of Arum’s trip could delay what might be bad news as far as the Pacquiao-Bradley PPV numbers go.

“Pacquiao’s gate for Bradley 2 was his worst in his 8 Vegas fights since becoming huge star vs Oscar. $1.1 million less than previous lowest,” Rafael said. “HBO tells me no PPV figures on #PacBradley this week because Arum out of country on family trip & they haven’t talked about the numbers yet.”

The gate being low isn’t a good sign. This could mean that the PPV numbers were low as well, and that would be especially bad news for Arum because Bradley is one of the few guys that he has to match Pacquiao up again in repeated rematches for the new few years. If Arum can’t depend on Bradley to help bring in big PPV numbers for rematches against Pacquiao, it’s going to leave the Filipino star with few options for big fights when and if he re-signs with Top Rank at the end of the year.

It’s still possible that the Pacquiao-Bradley 2 fight brought in good PPV numbers on HBO. In the past there’s been fights where the gate wasn’t good, but the overall PPV numbers were good. However, it’s not a good sign though that the gate numbers weren’t good for the fight.

Arum needs to bring in new blood for Pacquiao to fight because matching him against Bradley and Juan Manuel Marquez in never-ending rematches isn’t going to work. Marquez already said he’s not interested in fighting Pacquiao again, so Arum might not even have him unless he sweetens the deal offered to him. I think Marquez might say yes to a 50-50 purse split for a Pacquiao-Marquez 5 fight, but Arum needs to seriously start thinking about finding new opponents for Pacquiao.

« DeGale-Gonzalez: James needs victory on May 31st to get his long-awaited title shot

Khan vs Collazo: Will it be the fight to Steal the May 3rd Show? »