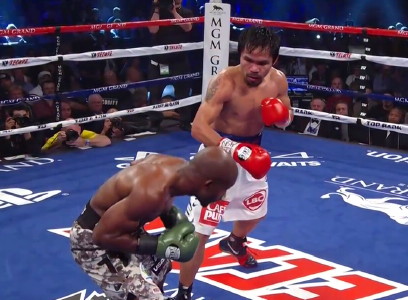 By Alon Calinao Dy: After winning the fight against WBO welterweight champion Timothy Bradley (31-1, 12 KO’s) in handing him his first career defeat last night, former 8 division world champion Manny Pacquiao (56-5-2, 38 KO’s) told the boxing media that he is willing to face anyone who is going after him. The MGM Grand was filled with fans and celebrities who watched the exciting in Las Vegas, Nevada.

This time around, all the three judges were in favour of Pacquiao and they had judged the rematch fairly. I think most of the fans, are happy with the final verdict, and even Tim Bradley himself, admitted that Pacquiao was the better fighter last night. It just says one thing that the integrity of boxing has finally returned after Pacquiao was arguably robbed in his fight against Bradley in 2012, despite his obvious dominance.

For Pacquiao, the victory over Bradley shows that he still has the killer instinct and his journey as a boxer will continue till there is another epic bout against Juan Manuel Marquez or until little Floyd Mayweather Jr. will show his courage in the ring. The Filipino champ is not going to retire yet. But for now, there is no clear idea who is going to be the next target of the Filipino boxing icon, although Pacquiao said that he is willing to fight anybody. But it all depends upon his promoter Top Rank Bob Arum, and of course, his two possible opponents.

In short, this is still the time for Pacquiao to shine in the boxing world. Last year was his bad luck. I believe if Marquez is going to fight Pacquiao right now, this would be the end of his boxing career because I have noticed has Pacquiao regained his momentum as one of the best boxers in the world today.

The Appreciation and Career of Manny Pacquiao »