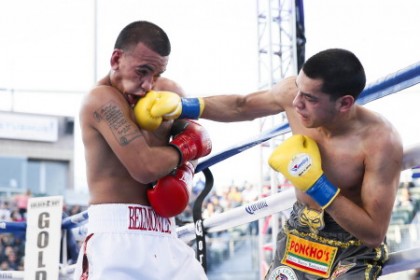 (Photo credit: Esther Lin/Showtime) By Jim Dower: In an dull fight, WBC lightweight champion Omar Figueroa (23-0-1, 17 KO’s) retained his WBC title with a 12 round split decision win over a spoiling challenger Jerry Belmontes (19-4, 5 KO’s) on Saturday night at the Stubhub Center in Carson, California. The final judges scores were 118-110 and 116-112 for Figueroa, and 115-113 for Belmontes.

Belmontes would have won the fight had he let his hands go, but after the 6th round, Belmontes started moving constantly and keeping on the outside in a prolonged keep away. It’s hard to understand what Belmontes was thinking about because he could have won this fight had he kept mixing it up with Figueroa, as he was landing the cleaner shots.

Figueroa did a good job of letting his hands go whenever he was able to catch up to Belmontes. He wasn’t putting a lot of power on the shots because he was being smothered much of the time.

Figueroa suffered a bloody nose in the 2nd round, and his nose continued to bleed through much of the fight. Belmontes’ face began to show the wear and tear by the 7th from the slapping shots that Figueroa was landing.

Figueroa should have been able to move quickly around the ring to stay close to Belmontes, but he didn’t look like he’d been trained for that kind of fight. You have to wonder why Figueroa wasn’t prepared for that kind of game because Belmontes always uses a lot of movement in his fights, sow hat he was doing tonight was the norm for him.

“I was trying top put on a shot but he was just running,” Figueroa said. “I apologize to the fans. I knew he was going to run and make the best of it.”

With this performance it’s doubtful that Belmontes will find himself on Showtime again. He did far too much running, and the booing of the fight from the fans was continuous.

Why the Klitschkos cannot be considered historically great »