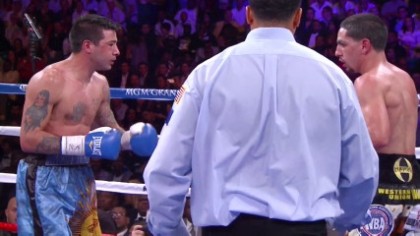 That’s not a good match-up because Matthysse is bigger and stronger than Molina. That would be halfway decent opponent for Figueroa, because he’s a lightweight at least. If Golden Boy is matching Matthysse with Molina, then it’s quite possible that Thurman and Figueroa will be facing opposition that are less than impressive as well.

Matthysse lose his last fight to WBA/WBC light welterweight champion Danny Garcia last September at the MGM Grand in Las Vegas, Nevada. It was a good fight except for the holding, running and the low blows that Garcia was constantly landing. Matthysse wanted a rematch, but Garcia went in another direction in facing Mauricio Herrera instead. Matthysse is capable of beating much better opposition than a lightweight like Molina. Matthysse isn’t someone that Golden Boy needs to carefully match, because he can’t beat pretty much most of the opposition at 140. I think he would have beaten Garcia if not work all of his low blows, running and holding he did in the fight.

New Rules: Time for a change in Boxing »