Gamboa and Guerrero not options for Pacquiao’s next fight, says Arum 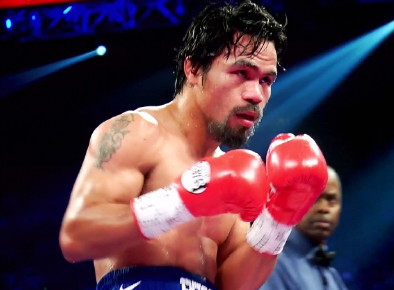 By Chris Williams: Top Rank promoter Bob Arum said that Robert Guerrero and Yuriorkis Gamboa are not being looked at as potential opponents for Manny Pacquiao’s next fight on April 12th, according to the Manila Standard. Arum it’s still the same two guys – Tim Bradley and Ruslan Provodnikov – as before. He’s trying to iron out a deal with one of them, and he thinks he should be able to make an announcement on the fight within a week at the latest.

Bradley and Provodnikov are both with Top Rank, so that’s pretty much the only reason they’re being looked at for Pacquiao’s next. The problem with those guys is very few boxing fans are interested in seeing Pacquiao fight either of them except for Pacquiao’s hardcore fans. Normal fans aren’t interested in seeing Pacquiao chase Bradley around the ring for 12 rounds in a game of cat and mouse.

Provodnikov isn’t an appealing option because he has no fan base in the U.S, and besides that he’s Pacquiao’s former sparring partner. How do you sell a fight between Pacquiao and his sparring partner? Good luck, Arum, in trying to sell that to the U.S. fans.

“I am trying to work out the best possible purse for Manny that I can,” Pacquiao’s adviser Michael Koncz said to the Manila Standard. “There are a lot of variables but I think we are going to have it wrapped up this week.”

You can bet there’s going to be a lot of variables. One problem is when you pay Pacquiao over $20 million for a fight, it’s difficult to work the numbers if you can’t guarantee that the fight will bring in more than 475,000 pay-per-view buys.

If Arum guarantees Pacquiao a huge $20+ million paycheck for the Bradley or Provodnikov fight, and it then brings in less than 500,000 PPV buys, then the money won’t work out. That’s the problem. Pacquiao’s PPV numbers have deteriorated recently for some reason. I think it has to do with Arum making the blunder of putting him in with a fighter coming off of a loss in Brandon Rios. That was a dumb move.

It also wasn’t the smartest thing for Arum to stage the fight in Macao, China. Having Pacquiao fight Bradley or Provodnikov is likely going to lead to similar poor PPV numbers, because fans don’t want to have to pay to see Pacquiao fight those guys. Arum needs to bring in some new blood, and I’m not talking about Provodnikov. He needs to go outside of his Top Rank stable to find some interesting opponents because Bradley and Provodnikov will be a disaster for Pacquiao.

If the remainder of Pacquiao’s career is spent with him fighting Bradley, Mike Alvarado, Brandon Rios, and Provodnikov, then I feel sorry for Pacquiao. I can see his PPV numbers dwindling with each fight, in large part because fans don’t want to see him fight those guys. Those are boring fights. If Pacquiao is good with it, then he needs to sign a long-term contract with Top Rank that will take him to the end of his career.

« My views on the Mayweather-Khan bout

Hearn: Anthony Joshua will be ready for Chisora and Fury by the end of 2014 »