Deontay to Fury: I dare you to send that contract 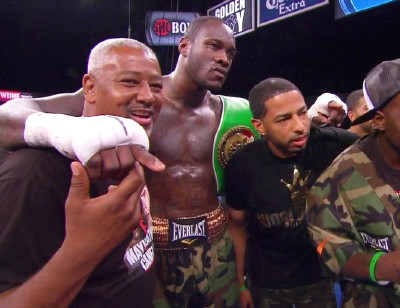 By Scott Gilfoid: Unbeaten American heavyweight contender Deontay Wilder (30-0, 30 KO’s) seems to have gotten a little tired of Tyson Fury mouthing off on twitter, so he decided to fire back a salvo to give him a taste of his own medicine while at the same time urging him to get off his backside and send a contract over for him to fight.

The talented 6’7″ Deontay wants to get Fury in the ring so that he can knock him out and finish him as a major player in the heavyweight division. Steve Cunningham came close to doing the job on Fury last April in their fight in New York, but Fury was able to get up after being knocked flat in the 2nd round. Cunningham was too tired from throwing that one shot to do much more in the fight, but he came real close to putting the Fury hype to rest.

Deontay Wilder ‏said “Tyson Fury stick another tampon in your a**; Your period is mighty heavy w/a strong flow. All you got to do is get Hennessy Sports send the contract. Tyson Fury, stop talking all this nonsense already. It’s getting very old. I dare you to send that contract, FAT MOMMA B****.”

It’s interesting that Fury is talking about wanting to fight Deontay when he pretty much has his next two fights lined up, and neither of them are against Deontay. On February 15th, Fury will be taking a tune-up bout against an opponent still to be determined. That opponent is expected to be a soft touch in order to get the rust off of Fury. After that, Fury will be matched against Dereck Chisora in an unnecessary rematch in June. After that, Fury will likely face Lucas “Big Daddy” Browne. The year will almost be over for Fury by the time he gets all those fights out of the way, so there’s no way he’ll be able to step inside the ring with Deontay in 2014.

« Sturm says no offer was made to Martin Murray

McCrory thinks Wladimir will be vulnerable now that Vitali has retired »