Deontay willing to fight Tyson Fury in the UK 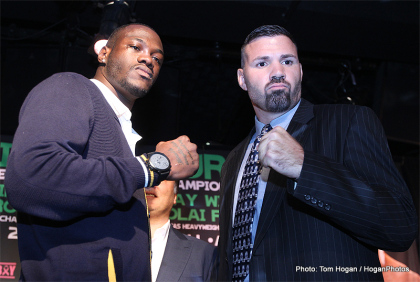 By Scott Gilfoid: American heavyweight Deontay Wilder (29-0, 29 KO’s) sees a fight between himself and Britain’s Tyson Fury (21-0, 15 KO’s) as being inevitable in the future, and he’s willing to come to the UK to make the fight happen. Deontay expects to capture one of the world title belts in early 2014 against one of the Klitschko brothers. Once Deontay has one of the heavyweight world straps, he expects the fight against the 6’9″ Tyson Fury to take place.

However, a fight between Deontay and Fury would likely have to be an optional title defense for Deontay because Fury will almost surely lose by knockout to former WBA heavyweight champion David Haye next February in their scheduled fight, if it takes place at that time.

Deontay told BoxNation “The fight between me and Tyson Fury will definitely happen…I would fight him anywhere. I’m a traveler, a global fighter. I fight anywhere all over the world; that’s how you become legendary…I love England. I feel like it’s my home so it won’t be no different if it’s in the United States or England.”

Oh boy, I don’t think Fury is going to like to hear this because he won’t be able to use the old ‘He wouldn’t agree to fight me in England’ excuse for not taking the Deontay fight. I honestly can’t see Fury accepting a fight against Deontay, even if he had one of the world title belts in his possession. I see Fury going towards the path of least resistance by hunting for a belt that isn’t held by Deontay and trying his luck with going after that strap.

I think Fury would have to be dragged kicking and screaming into the ring to face a talent like Deontay because he wouldn’t have the power to compete against the hard hitting fighter. Fury’s main advantage, his height and reach, would be no use for him against the equally big 6’7″ Deontay with his long arms and brutal power.

Fury really should accept the fight against Deontay because that’s going to be the quickest way to a title shot after Haye beats him next year. If Fury decides to work his way into a title shot to become the mandatory title challenger for the WBC heavyweight strap, it’s going to take the guy ages to get to that point and he may not ever make it because the World Boxing Council will require that Fury beat one of the top contenders such as Bermane Stiverne or Chris Arreola in order to earn the mandatory challenger spot.

I mean, they’re not just going to hand Fury the mandatory position on a silver platter without him having to face one of the sluggers. The thing is I don’t see Fury being able to beat the likes of Arreola or Stiverne. Those aren’t like the soft opposition that Fury has been facing thus far in his career and he’d have to eat tons of powerful shots to the head to have a chance of beating those guys. Well, we saw hat happened to Fury when he was hit by a small cruiserweight in Steven Cunningham last April when he was dropped on the canvas from a right hand. Cunningham put everything he had in that shot and almost knocked Fury out. Arreola and Stiverne are capable of punching with better power than that all night long without getting tired.