Deontay to Fury: It’s game over for you once I get the WBC title 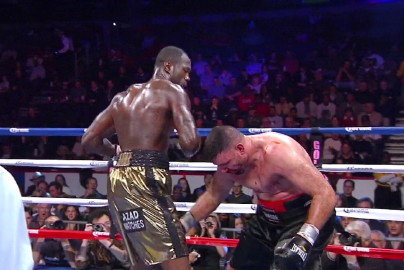 By Scott Gilfoid: Unbeaten American heavyweight Deontay Wilder (30-0, 30 KO’s) intends on finishing the Tyson Fury (21-0, 15 KO’s) hype machine after Deontay picks up the WBC heavyweight title next year. Deontay, 28, says he’ll give Fury a title shot in order to knock him out. In other words, Deontay, 6’7″, won’t make Fury wait the way that Vitali and Wladimir Klitschko have done with him. He’s doing to give the 6’9″ Fury an immediate shot at his title so that he can expose him.

Deontay said on his twitter “Tyson Fury, come my friend, I will make it worth your while. Besides, once I get this WBC belt, it’s game over for you all!”

Fury said “The biggest fight of my era will be against Bronze Bomber [Deontay]! But I will knock him out.”

What’s really too bad about all of this is that the likely only way that Deontay and Fury will be able to fight is if Deontay is feeling charitable to still give Fury a title shot after he gets knocked out by David Haye next February. That loss should sent Fury to the back of the line for a couple of years while he rebuilds himself, but Deontay is a pretty nice guy and he’s going to need an opponent that can talk a good game. That’s why Deontay will likely still give Fury a crack at his title even if he gets knocked out by David Haye in the 1st or 2nd round in February. It would be good for boxing if Fury were able to beat Haye because that would set up the war of the gargantuans between Deontay and Fury, but it’s not likely that Fury will be able to make it past Haye in one piece. Fury just hasn’t had the experience and now show the kind of talent that would make you think that he can beat Haye.

We saw last Saturday that Deontay can handle tall opponents with his 4th round destruction of the 6’6″ Nicolai Firtha. This is the same fighter that staggered Fury in the 4th round of their fight in 2011 and had him ready to go near the end of the round. Fury had to clinch in order to survive. Although Fury did come back to get a stoppage in the 5th, it was pretty clear that Fury did not handle the power of Firtha very well. Deontay is so much faster and stronger than Firtha is, and he’s done a great job of developing his jab and left hook. Those are both becoming serious weapons for him.

Cotto or Quillin as next opponent for Martinez? »