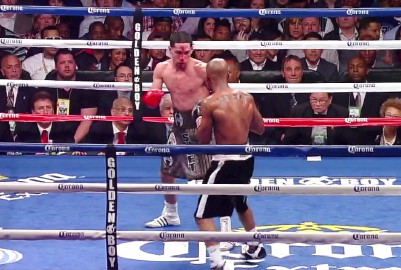 By Ken Woods: The fight between Danny Garcia and Lucas Matthysee is one of the most talked about matches this year. It has garnered strong emotions in both boxers’ favor. My question is, why?

Many believe Matthysee will destroy Garcia because of his recent performances, but let’s look at both fighters’ abilities and past bouts from a fair perspective.

Both of these boxers faced Zab Judah. Garcia and Matthysee both knocked him down and could not finish the job. However, Garcia had Judah hurt a few times in the bout while Matthysee lost a close controversial decision. Judah also gave a better performance against Garcia. Matthysee did not get robbed. The notion amongst boxing fans that one fighter gets robbed if the fight is close is getting out of hand.

Both of these junior welterweights are flat-footed for the most part. They both have power in both fists, although Matthysee is clearly more powerful. They also both throw wide looping punches and are open to getting tagged. Garcia’s defense is limited more than Matthysee, but the power-punching Argentinian is more susceptible to counters. Each one of these fighters has good timing as well.

This contest is an evenly-matched bout. The idea that one fighter is going to terminate the other is leaning towards hyperbole. Matthysee is the betting favorite and that comes with the hype he has garnered with his latest knockouts.

Neither fighter has beaten world-class opposition. Matthysee lost to the best two good boxers that he faced, even though both contests were controversial. Lamont Peterson has been down against Victor Ortiz, Amir Khan, and feather-fisted Tim Bradley. So let’s not act like Matthysee knocking him out is a dramatic victory.

Garcia is undefeated, but he had a war with a past-prime Erik Morales in their first fight, although fellow Argentinian Marcos Maidana went to war with Morales too. He knocked out a glass-jawed Khan and had trouble with an aging Judah. Garcia is not elite either.

Both guys show flashes of boxing ability, but not consistently enough to be considered technically sound. Matthysee can cut off the ring and land bombs. He will find Garcia in this bout, there is no doubt about that. However, Matthysee’s previous opponents didn’t make him respect their power. Garcia will make Matthysee respect his punching ability. Once Matthysee finds success, he often gets reckless, which is a problem with the counter-punching Garcia.

This fight depends on who will make the necessary adjustments. Garcia’s countering makes me lean towards him in this fight. I don’t have a stake in this match either way. I am not getting a share of the pay-per-view, live gate, or purses for the bout, so it doesn’t matter to me who wins. If Matthysee wins, I will gladly write a piece congratulating him and admitting I’m wrong. It won’t be the first time I’ve been wrong or the last.

I enjoy the boxing, but I also enjoy balance and fairness in assessing boxers and outcomes. It seems some in the boxing community don’t share the same sentiment.

« Mayweather-Canelo: Who does the weight issue favor?

Mayweather vs. Canelo: The rhetoric remains the same »