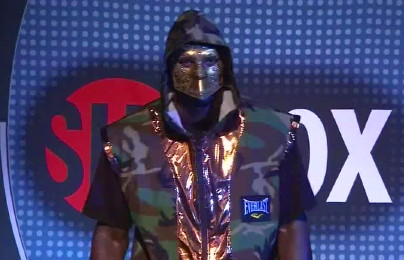 By Scott Gilfoid: Unbeaten heavyweight Deontay Wilder (29-0, 29 KO’s) is enjoying himself today after destroying Sergei Liakhovich (25-6, 16 KO’s) in a 1st round KO last night at the Fantasy Springs Casino, in Indio, California, USA. Deontay smashed Liakhovich to smithereens with two sledgehammer right hands to the head that ended the fight in leading Liakhovich on his back on the canvas.

With the victory now behind him, Deontay is enjoying how his many critics are suffering today due to his success. It’s sad that a talented fighter like Deontay would have so many critics, but it’s actually quite normal when you have someone as talented as him. Many fans tend to pick out their favorite fighters from the same country they’re from, and they simply can’t enjoy a talented fighter like Deontay.

Deontay said on his twitter ”Yo, stop scratching your head or looking dumb founded. You’re not dreaming nor your eyes or mind is playing games, wake up this s***’s real, Big #Salute to all my peoples man, we go crush these hater one fight at a time. Damn I love my Fans they’re the Best #Bombsquad. Lmao… I bet you haters about to kill y’all selves now. I’m going to keep proving you wrong each and every time. Liakhovich has never been ko’d lesser then 9 rounds I did it in 1. I’m taking over the division especially in America #EnoughSaid. To All My Haters,Thx for the Love & Ignorance you have shown, watch me prove you wrong again on @SHOsports.”

Deontay definitely has reasons to gloat. He’s going to get a lot more in the future when he defeats the winner of the Chris Arreola vs. Seth Mitchell bout before the end of the year. I mean, I’d prefer to see Deontay to face someone better than these guys, but trying to get the likes Kubrat Pulev in the ring might prove to be impossible.

Pulev is facing Tony Thompson in two weeks in an IBF heavyweight eliminator, and he’s not going to want to jump through yet another hoop to get a title shot against IBF/IBO/WBA/WBO heavyweight champion Wladimir Klitschko.