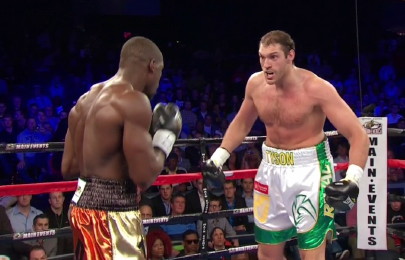 By Scott Gilfoid: Tyson Fury (21-0, 15 KO’s) signed the contract for his fight against David Haye (26-2, 24 KO’s) on September 28th, and the fight is now official. Fury and Haye are locked into their all British domestic clash at the Manchester Arena in Manchester, England.

Fury has this short message to announce his fight on his social media site: “Have this b**ch, Haye! I’ve signed!”

Fury may end up getting knocked cold in one or two rounds, but he at least will be well paid in getting stopped. The two fighters could wind up getting paid £5million each. It’s hard to imagine Fury getting that kind of cash given that he’s not done much in his career in terms of facing quality opposition.

Fury’s best opponents thus far have been Kevin Johnson and Steve Cunningham. That’s a far cry from the top dogs in the division like Kubrat Pulev, Deontay Wilder, Magomed Abdsulalov and the Klitschko brothers. I can’t imagine an American heavyweight making that kind of green after having fought the same guys that Fury has fought during his four year pro career.

It’s difficult to imagine a scenario where Fury can actually win this fight. He’s missing the right hand power that Deontay has. If you could transplant Deontay’s right hand power into Fury’s body, Haye would be in deep trouble on September 28th.

Fury’s chin is just begging to be tagged with the way he stands to straight up with his guard low without anything to block incoming from his opponents. Fury was very lucky in his last fight against Steve Cunningham that the American fighter ran out of gas after he dropped him because if he had three good rounds of gas in his fuel tank instead of just two, Fury would have been out of there.

Haye is good for at least five good rounds of nonstop punching before he gasses, and by then I see Fury long gone having been knocked out and taken out of the ring by his trainer.

« Now the dust has settled on David Price

Canelo: Guerrero didn’t have a game plan against Mayweather »