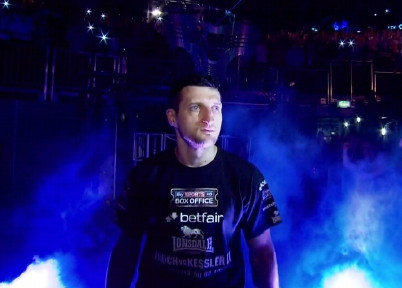 By Scott Gilfoid: It looks like IBF/WBA super middleweight champion Carl Froch (31-2, 22 KO’s) is stuck between a rock and a hard place in terms of having to make a decision about his IBF strap. The International Boxing Federation ordered him to defend his title against his mandatory challenger George Groves (19-0, 15 KO’s), and unless Froch does that he’ll likely be stripped of the IBF strap.

Froch already maneuvered around the previous IBF mandatory Adonis Stevenson to take a second fight against Mikkel Kessler, but now Froch is going to have to face Groves or give up the IBF strap. Froch says he’ll take the fight with Groves unless another big fight falls into his lap. I think what he’s referring to is a third fight against Kessler. Froch has already said he wants that fight.

Froch said to Sky Sports “George Groves is next in line for the IBF title and, you know me, I defend my title rather vacate it…I’m not in a position where I want to give a belt up…I’m not going to just give up that belt unless there’s a good option for me and a good road for me to go down.

I think what Froch is talking about is a third fight against Kessler. He’s definitely not talking about a rematch with Andre Ward, because that’s probably not a fight that Froch would call a good option. I mean, could you see Froch vacate his IBF title to fight Ward? That’s like Froch volunteering to lose.

If the choice for Froch is to fight Groves or Ward, I see Froch choosing Groves every time without fail. Groves is the easier option of the two, but still a tough fight for Froch to win.

Froch doesn’t seem eager to fight Bernard Hopkins or Nathan Cleverly, so they’re definitely not guys that he would vacate his IBF title to fight.

Froch didn’t seem all that interested in fighting Adonis Stevenson, so he’s obviously not an option.

The only fighter that I could see Froch talking about as being a good option to where he would vacate his IBF title to fight would be Kessler again, and I don’t see that as a fight the British public will want to see a third time. Maybe they would be interested in the distant future if Kessler were to start fighting regularly and beat some quality opponents to make it look like Froch would be accomplishing something by fighting him, but Kessler hasn’t had a tough fight in ages.

Before Froch fought Kessler last May, Kessler’s last three opponents in the last two years were Mehdi Bouadla, Allan Green and Brian Magee. Before Kessler fought any of those guys, he fought Froch in 2010. So what does that tell you? Kessler is no longer facing the top dogs. I don’t consider Bouadla, Green and Magee as top fighters.

Now if Kessler were to get busy and fight the likes of Stevenson, the Dirrell brothers, Edwin Rodriguez, Marco Antonio Periban, Sakio Bika, Tommy Oothuizen and Robert Stieglitz, then I wouldn’t mind so much seeing Froch face him again in a third fight. But right now, Kessler seems like a fighter that is playing out his string and no longer fighting the top guys in the division. Why would the boxing public want to see a Froch-Kessler third fight?

It’s no longer interesting right now unless Kessler redeems himself by fighting and beating a live body, not a 2nd tier fighter.

I see Groves beating Froch if that fight happens. As god awful as Froch looked last may against Kessler, I think Groves would beat Froch in his sleep. The only reason Kessler lost the fight was because he didn’t have the sense to start fighting until the 5th round; otherwise he’d have beaten Froch again.