Arakawa makes a name for himself in loss to Omar Figueroa 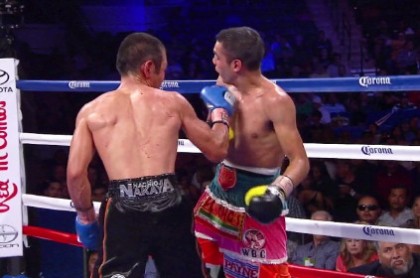 By Dan Ambrose: Nihito Arakawa (24-3-1, 16 KO’s) may have lost the fight last night to Omar Figueroa (22-0-1, 17 KO’s) by a 12 round unanimous decision, but he definitely won the event as he showed a ton of courage in battling the younger, stronger and also the heavier 23-year-old Figueroa in their fight at the AT&T Center, in San Antonio, Texas, USA.

Arakawa was down in rounds two and six and it might have seemed to Figueroa that he had the fight in the bag early on. But Arakawa had no quit in him and he just throwing nonstop punches for the entire fight. Finally, he wore Figueroa down in the 11th and 12th rounds and got the better of the young Mexican fighter, whose face was covered with blood and swollen from Arakawa’s many shots.

Arakawa may not have possessed the huge punching power that Figueroa had going for him, but the sheer numbers of shots that he landed to the head of Figueroa had him pretty well beaten up by the end of the fight.

There’s no question that Figueroa landed the harder punches in the fight, but he was hit quite a bit by Arakawa and the shots seemed to have more effect on him than his own shots did against the Japanese fighter.

Figueroa would have been in deep trouble had Arakawa had just a little more power. He wouldn’t have needed much more than he did in order to stop Figueroa, and that brings the question up about whether Golden Boy has been hyping Figueroa too much.

I just don’t see Figueroa being able to compete with the likes of Adrien Broner, the current WBA lightweight champion, if he chooses to move back down and defend his title against Figueroa. I think that would be a slaughter if that fight happens. Broner would nullify enough of Figueroa’s offense in order to find his chin and I can’t see him lasting even six rounds against Broner. Figueroa reminds me a lot of a weaker version of Antonio DeMarco.

I’d like to see Arakawa back on Showtime in the near future against anyone once he recovers from this fight. His left eye was nearly closed and his face was a little swollen from the shots he absorbed from Figueroa.

« Pacquiao’s fight in Macao against Rios makes it tough on his U.S fans to see him