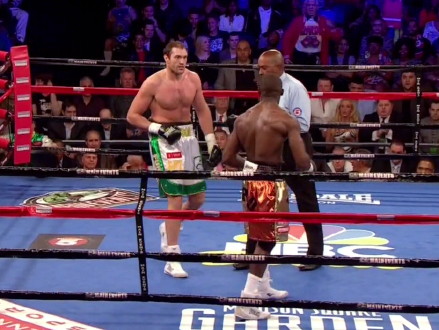 The word is the 6’9” Fury could be facing David Haye later on this year if and when Haye gets past Manuel Charr. That’s going to be a tough one for Haye because Charr’s got decent power and Haye will be out-weighed by over 30 pounds. But if Haye gets past Charr, we’ll likely see him fighting Fury before the end of the year.

Fury needs to stay far away from American heavyweight Deontay Wilder as well. That guy hits WAY too hard for Fury and I can see a Fury getting knocked out with the first punch that Wilder lands. Wilder wanted to fight Fury but he’s been unable to get the Brit to agree to fight him for some reason. I wonder why Fury won’t fight him?

A Haye-Fury fight is a major, major mismatch of epic proportions. I’m not really high on Haye but I think he’s got more than enough power to knock Fury out in one round. I honestly can’t see Fury making it out of the 1st round if Haye comes in looking to blast away from the very start, and I think that’s exactly what he’ll do.

I don’t think Fury will ever be ready for Haye, so it’s kind of a situation where he shouldn’t even bother ever fighting him because he’s not on Haye’s level and if he fights him it’s going to be bad, really bad for Fury.

Fury’s window for a title shot against one of the Klitschkos will likely be shut permanently if Haye knocks him out because it’ll take Fury ages to get back to where he is now with his inflated ranking and he’s not going to get a title shot handed to him on a silver platter by Wladimir or Vitali because they’re likely going to insist that he fights to become the mandatory challenger, and for Fury to become the mandatory he’s going to have to beat a heavyweight like Bermane Stiverne, Chris Arreola or Kubrat Pulev. I wish Fury a lot of luck in trying to beat those guys.

I rate them as much better heavyweights than him and they’ll find his chin and knock him out. If Steve Cunningham was able to knock Fury down, I hate to picture what those guys would do to him.