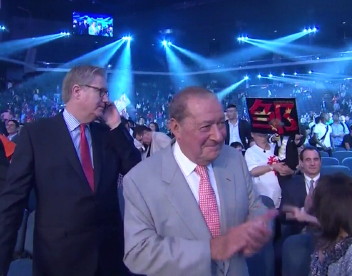 By Robert Elmore: Bob Arum has made great contributions to boxing. He was the one that got Marvin Hagler a title shot against Vito Antuofermo after Hagler was being constantly passed over. He organized matches such as Eavnder Holyfield-George Foreman; Mavin Hagler-Thomas Hearns, and many others. Arum has done a great job with Manny Pacquiao’s career.

But Arum’s sudden move to Macau raised a lot of eyebrows. He has stood firm on fact that the taxes are less in China than in the United States. That may be true, but there is another side to this equation. The series with Juan Manuel Marquez was starting to get stale.

Their 3rd fight sold 1.4 million buys, but their 4th encounter did 1.1 million buys. The knockout by Marquez coupled with the fact that Pac’s fight against Tim Bradley only did 900,000 buys means that Manny’s pay per view value in the U.S. has run it’s course.

If the Pac’s fight with Brandon Rois were taking place on Amercian soil, only die heart Pac’s fans would buy the fight. The Asian market maybe an untapped source. If Top Rank is going to go there, they will have to put on constantly good fights. The recently signed Zou Shiming is very popular among the Chinese people. Unless Arum plans to never bring him to the American audience, then he maybe on to something.

Arum could put together a couple fights and put Shiming on the undercard to generate more money and interest. As far fighters from his own stable carrying the “star” torch,, there is nobody with enough drawing power that could make a dent in that market. Pacquiao is barley talked about in the media anymore. He maybe mentioned within the boxing circles, but not so much outside. It’ll be interesting to see how long this Macu market will last.

« Hearn’s 2-fight plan for Froch: Kessler or Ward next, then Groves