Who’s next in line? The Floyd Mayweather Lottery 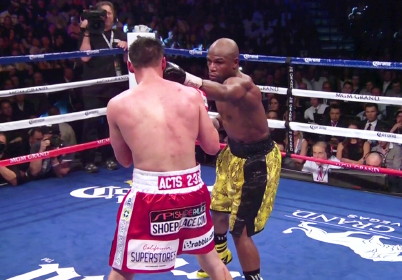 By Samuel Roy Junior: Unbeaten Floyd Mayweather Jr. (44-0, 26 KO’s) pocketed a cool $32 million for the Robert Guerrero (31-2-1, 18 KO’s) fight last Saturday night. That’s some amount, considering a large number of people out there that probably would of preferred to see him face a different opponent.

Anyhow, Guerrero was the mandatory challenger, he was game, and he’d just beaten comfortably a solid welterweight in Andre Berto, something most people didn’t actually expect him to do. He earned his shot, within the requirements of the WBC governing body. Except the boxing public usually have their own set of rules, but hey, there’s always going to be debate. That’s what makes boxing compelling in not just the ring. The fans and enthusiasts really do make the build ups to fights an exciting experience, different thoughts from different people are always welcome.

Back to the article anyhow, and we all already (and more than likely before May 4th even happened, without discredit to Guerrero) look towards Floyd’s next opponent. Who will it be? In no particular order, here are my suggestions and what they bring to the table:

Devon Alexander – Although not THAT much of a big name, a credible challenger who has already faced some decent names at light-welter and welterweight. A southpaw with decent hand speed and movement, has dominated a rugged opponent in Marcos Maidana, and gave Timothy Bradley a very good run for his money before losing in unfortunate fashion in two notable past fights. One problem being that Alexander would be a difficult character to promote the fight with, I don’t see any MAJOR reasons why this wouldnt make a good fight, a decent chess match here. Floyd KO.

Saul “Canelo” Alvarez – The new ‘it’ fight. Would most definitely break 1.5 million buys if taken place on a Mexican holiday weekend, this is the opponent people seem to be classing as the most ‘dangerous’ of Floyd’s next possible opponents. Despite Alvarez winning a disputed decision in the eyes of some against his last opponent in Austin Trout, this fight would more than likely have Floyd moving up again to the 154lbs weight class. A young strong challenger with a great Mexican fan base and a hot property now in the US market too, some have said this would be an unfair fight towards Mayweather on the count of Alvarez usually ballooning back up to past 170lbs come fight night. A limit would have to be put on a rehydration clause for people to be less sceptical about the ‘fairness’ in weight difference. In my opinion, Floyd showed too much for an Alvarez that didn’t impress as well as he would of liked against his first REAL big name fighter that was in his prime. One that would make the most money. Floyd UD.

Timothy Bradley – A fighter who, in his last fight with Ruslan Provodnikov, truly dismissed and silenced his critics that claimed he was a boring fighter. A slugfest that should definitely be considered in the candidates for Fight Of The Year, Bradley showed he has real heart, and a fantastic chin, and a great ability to deal with punishment while giving out his own. Disputed or not, he’s beaten a big name in Pac-Man by boxing his way to the end, and slugged his way to the end with Provodnikov. Would end up eating right hands just like Guerrero all night though with his usual come-foward style, if he didnt come in with a more than half decent game plan. A good character for the build up to a fight, would likely win some fans by emphasizing his will to win and get the job done against the man they call Money. Floyd UD.

I will admit, it does seem to me that a few desperate names have been thrown about prior and post Guerrero bout, with regards to the next possible opponent, i.e Paulie Malignaggi (nice guy don’t get me wrong, just doesnt belong in the ring with Mayweather), but that just goes to show that there really might not be that many people left that Mayweather could face, and still get a fair shake from the media and fans. There will obviously always be debate when it comes to opponents, ability, legacy, among other things in respect of different fighters, especially Mayweather because he such a big character, but if he does actually get the credit he deserves from a large majority of the boxing public, it won’t be for a good few years after he’s gone. We won’t see him do a Bernard Hopkins, because the athleticism Mayweather uses wouldn’t hold up until the late 40’s like Hopkins’s style, 30 months is just about right. Lets all wait and see if he makes that 49-0.

« Mayweather Will End Up Knocking Broner Out