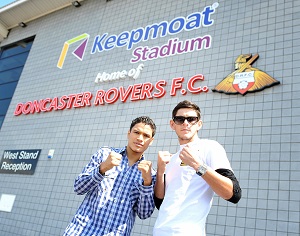 By Scott Gilfoid: Earlier today, bantamweight contender Jaime McDonnell (20-2-1, 9 KO’s) made weight for his fight against the devastating puncher Julio Ceja (24-0, 22 KO’s) for their fight on Saturday for the vacant IBF bantamweight title that previously belonged to Leo Santa Cruz before he vacated it to move up to 122.

The Ceja-McDonnell fight will be taking place in the UK at the Keepmoat Stadium, Doncaster.

This is going to be a really tough fight for McDonnell because the 5’5 ½” Ceja can really punch with either hand. McDonnell, 5’8”, will have a 2 ½” height advantage over Ceja but that’s probably not going to be nearly enough to keep him off of him because Ceja is one of those guys that walks through his opponents shots to land his bigger punches.

I can see McDonnell flicking out on one of his weak jabs or power shots and it having no effect on being able to slow down the forward progress of Ceja. The thing is once Ceja is within punching range, he can devastate you quickly with his hooks to the head. Look at Ceja’s record: 24-0 with 22 knockouts.

That’s a knockout percentage of 91.67 percent. I don’t know of too many fighters in boxing that has a KO percentage like that aside from unbeaten American heavyweight Deontay Wilder (28-0, 28 KO’s).

The thing with Ceja is he’s been compiling those knockout victories over quality opposition. He’s not just taking on fluff opponents and knocking them out cold. He’s beating some really good fighters and making it look really easy.

McDonnell doesn’t have that kind of power or that kind of experience. He’s been mostly fighting in the UK against little known domestic and European fodder and having his way pretty much. He lucked out recently – or he thought he lucked out – when Leo Santa Cruz vacated his title. That probably saved McDonnell a bad knockout loss because Santa Cruz is no joke. But fate has been unkind to McDonnell because now he has to face the tough Mexican Ceja and I don’t see it going well for McDonnell tomorrow night.

I imagine he wants as many of his supporters to come to the fight as possible to encourage him and give him support in his time of need, but I still see this one ending with McDonnell getting knocked out. He needs to try and use his reach to keep away from Ceja but I still don’t think he’s going to be able to keep away from enough to finish the fight on his feet.