Peter Fury: Tyson looking for fight with Haye at end of the year 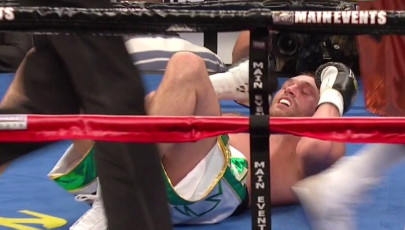 By Scott Gilfoid: Peter Fury, the trainer and uncle for unbeaten heavyweight contender Tyson Fury (21-0, 15 KO’s), says that they’re interested in facing former WBA heavyweight champion David Haye in a fight at the end of the year.

Peter Fury said this as quoted by the Manchester Evening News “We are in talks with them over a possible fight later on this year. We are up to fight David Haye and he’s up to fight us. It looks possible….I think David Haye and Tyson Fury is the biggest world title fight out there.”

Gee, I wonder what happened to Fury fighting unbeaten #1 IBF Kubrat Pulev in the IBF heavyweight eliminator bout. Has Fury changed his mind about that? I can’t say I blame him if he has because Pulev beats the brakes off of Fury if and when that fight happens.

Haye says is recovering from a dislocated left hand, and once it heals he plans on fighting #8 WBC contender Manuel Charr at some point this year. Who knows how long it’ll take for Haye’s injury to heal and for the Charr fight to take place.

So is Fury just going to hang around not fighting and just waiting until Haye is free to fight him at the end of the year or in early 2014 or is Fury going to take the fight with Pulev and risk getting beaten and losing out on both the Haye and the title shot against IBF heavyweight champion Wladimir Klitschko? My guess is Fury will just hang around waiting rather than risking a loss to Pulev because that guy is the real deal and he’ll give Fury major problems in the process of beating him.

Fury looked awful last month in his first fight in the United States against 36-year-old former IBF cruiserweight champion Steve Cunningham. This was supposed to have been an easy fight for Fury, but instead we saw Fury get dropped by a right hand from Cunningham in the 2nd round and we also saw Fury stunned by a big right hand in the 3rd.

Fury is in a situation where if he wants to get the Haye fight, then he’s going to have to sit and wait a long time before it can take place. If Fury takes a fight with Pulev before then the chances are way too high that Fury will get knocked out and he won’t get the good cash that a Haye fight would bring him.

My advice to Fury would be to forget all about Pulev and instead to look for some more fodder opposition. Yeah, Fury will get dumped on by boxing fans for facing more weak opposition, but at least he’d get his good payday fight against Haye. But if Fury takes the fight with Pulev, he’ll get beat and then his fight with Haye will go down the drain with it, and of course so will his dreams of fighting for a world title against Wladimir.

Fury’s close call with Cunningham showed that Fury’s chin and defense just isn’t up to the mark for him to be facing high level heavyweight opposition. If a fringe contender like Cunningham was able to have Fury flat on his back on the canvas then just imagine what a top contender like Pulev will do to him.