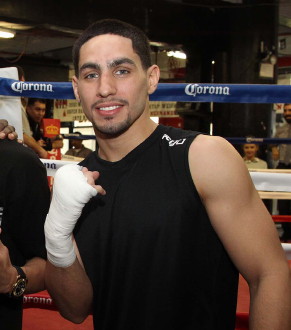 (Tom Casino/Showtime) By Allan Fox: In one of the stranger press conferences you’ll ever see, WBA/WBC light welterweight champion Danny Garcia (25-0, 16 KO’s) and challenger Zab Judah (42-7, 29 KO’s) conducted a split press conference instead of one with the two fighters together to hype their fight for Saturday night at the Barclays Center, Brooklyn, New York, USA.

The two fighters were kept apart due to “tension in the air,” Oscar De La Hoya said as quoted by fightnews.

Judah said “He’s going to sleep. This is Brooklyn right here. I’m ready. I’m locked & loaded. y’all talking about a hook? I live in Las Vegas, the land of the hookers! I know how to dodge em!”

Garcia said “I can’t wait to stare him in the eyes and take his soul out of his body. I’m going to take him into deep waters and drown him.”

Garcia, 25, is 10 years younger than the 35-year-old Judah, but will likely have a big power and weight advantage over him once the two fighters step inside the ring on Saturday night. Garcia could end up re-hydrating up to 160+ and that’s going to make him really hard for the lighter Judah to beat him.

Judah claims that he knows how to nullify Garcia’s left hook because he’s been in with a lot of fighters that use hooks as their primary weapons. If that’s the case then Judah will have a very good chance of winning this fight, as Garcia’s right hand is much less of a weapon than his left hook.

If Judah takes away Garcia’s left hook in the same way that WBA super bantamweight Guillermo Rigondeaux took away Nonito Donaire’s left hook earlier this month then this could be a very winnable fight for Judah. However, it’s not going to be easy for Judah to do this.

Should effective aggression have more value, when scoring a fight? »