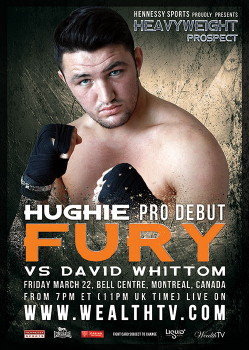 By Scott Gilfoid: Heavyweight Hughie Fury will be making his pro debut tonight against journeyman David Whittom (11-19-1, 7 KO’s) in a fight scheduled for four rounds on the undercard of the Adonis Stevenson vs. Darnell Boone card at the Bell Centre, in Montreal, Canada.

Fury, listed at 6’8”, is the nephew of unbeaten heavyweight contender Tyson Fury, and like Tyson, Hughie has little in the way of power, and tends to slap a lot with his punches. Hughie looks closer to 6’6” than 6’8”, so don’t buy the 6’8” business because he clearly looks to beat three inches shorter than Tyson when standing up.

Tyson and his promoter Mick Hennessey see Hughie as a future world champion. At 18, he’ll have to improve dramatically for that to happen because he’s too much of a slapper and too weak to compete with any of the current champions. He’s also old looking for 18, and it makes you wonder whether this guy is one of those types that matures quickly but then is washed up by the time he’s in his early 30s.

I wouldn’t be surprised if Whittom wins tonight because he’s got a little bit of power, and if Hughie tries to slug with him we could see Hughie on the canvas.

Whittom, 34, has lost 14 out of his last 15 fights in the last six years, so if Hughie can’t beat this guy then he needs to go back to the amateur ranks and make a career out of it down there because it doesn’t get much easier than this.

In looking at some of Hughie’s amateur fights the thing that jumps out at me, besides his lack of power and slapping punches, is his weak, pawing jab. Hughie’s jab is like a wet noodle that he just throws out there limply. He’s going to have to improve on that because what’s the point of him being 6’6” if he can’t keep his shorter opponents on the outside?

« Boxing Era’s have changed: Embrace it or don’t watch