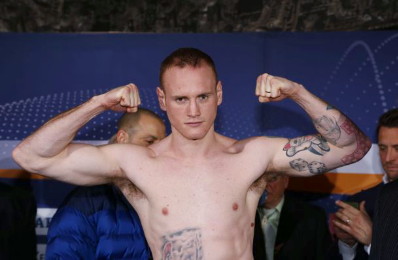 God, I hope this is the last time these guys fight because I want to see Abraham fight someone that actually has the chance to beat him, and Stieglitz proved clearly that he didn’t last year in August in losing by a 12 round unanimous decision.

The only reason we’re seeing a rematch now is because Stieglitz had a rematch clause. I hope someday that rematch clauses are done away with altogether because it doesn’t seem fair to the contenders that are waiting in line for a title shot to have guys fighting over and over again just because they have rematch clauses.

There’s no mystery about what’s going to happen tonight. The much bigger punching Abraham will walk the light hitting Stieglitz down in every round and give him a royal pounding. Stieglitz doesn’t have a chance to win this fight, and I’m sure he’s just happy for the payday he’ll be getting.
Since he was beaten by Abraham last year, Stieglitz has fought only once, beating someone named Michal Nieroda last January.

I never heard of the guy, but I’m not surprised that Stieglitz chose to fight a fodder opponent given that he a rematch locked in with Abraham by virtue of his rematch clause.

Abraham hasn’t done much either since his win over Stieglitz by choosing to face fringe contender Mehdi Bouadla, who Abraham beat by an easy 8th round knockout last year in December. This kind of matchmaking is nothing new for Abraham because that’s what he was known for while holding down the IBF middleweight title 2005 to 2009.

In that respect, Abraham is like fellow German, Felix Sturm with his soft opponents when facing non-mandatory challengers. He just seems to milk his titles for some reason, and I bet he’s happy as heck to be facing Stieglitz again instead of someone good that can beat him.

I’m just wondering how long it’ll be before the WBO forces Abraham to fight his #1 mandatory. My guess is we won’t see Abraham fighting his #1 contender until 2014 unless the WBO shows some teeth an actually forces Abraham to. Don’t hold your breath waiting for that to happen.

In a mismatch that just makes you shake your head and wonder why, unbeaten super middleweight George Groves (17-0, 13 KO’s) will be facing journeyman Baker Barakat (37-13-4, 25 KO’s) in a scheduled 8 round bout on the undercard. While there are some that applaud Groves for facing a weak opponent by saying it’s good that he’s staying busy, I’m not one of them.

I mean, if you’re going to stay busy then how about fighting some quality opponents that can actually improve your game instead of helping you pad your record and give you bad habits. We just saw Groves demolish a hopelessly over-matched 3rd tier fighter Dario German Balmaceda in three rounds earlier this month, and now we’re seeing Groves face another 3rd tier guy in Barakat.

I don’t see any benefit of Groves fighting weak opponents because if you saw how crude Groves looked against Balmaceda, you’ll realize that it’s not helping him. Groves threw technique out the window in that fight and went caveman against him by just throwing badly telegraphed power shots one after another to try and take him out of there. It’s the equivalent of having a major league baseball player in a game of softball where the pitches lobbed underhand in a slow manner to help him hit the ball out of the park.

If you take that player and then put him in an actual major league game with a pitcher that can throw over 100 mph in his next game, the chances are he’ll strike out every time he gets up. In other words, putting Groves in with fodder opposition is not helping him, and if he promoter Eddie Hearn doesn’t seem to realize this then Groves needs to dump him and find a good promoter like Top Rank or Golden Boy Promotions who can’t afford to put their fighters in soft fights.

In another mismatch on this card, unbeaten heavyweight contender Robert Helenius 18-0, 11 KO’s) will be facing British journeyman Michael Sprott (37-19, 17 KO’s) in a scheduled 10 round bout. The rounds of the fight are unimportant because this fight won’t be going the distance, no way. Helenius is going to KO Sprott, but not because Helenius is a good heavyweight, but rather he’s facing a weak opponent.

I’m not impressed with Helenius in the least, even before he tore up his right shoulder. He was always a sloppy looking fighter with no skills on the inside and just size going for him. His window of capturing a world title seems to have been closed permanently with his shoulder injury and his subsequent surgery to repair the problem.

The power in his right hand is now gone, and he only his left hook going for him, and that’s not powerful enough for him to beat the better heavyweights in the division. If Sprott was any good, he’d beat Helenius, but that’s not going to happen. Sprott needs to walk down Helenius, get in close where the 6’6” fighter has no skills, and then dominate him like Dereck Chisora did.

Also on tonight’s card are the following fights: