Malignaggi vs. Maidana possible for Judah-Garcia undercard on April 27th 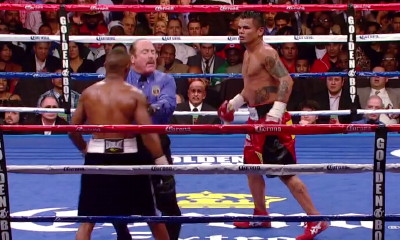 By Dan Ambrose: A fight between WBA World welterweight champion Paulie Malignaggi (32-4, 7 KO’s) and former WBA light welterweight champion Marcos Maidana (33-3, 30 KO’s) has been tentatively penciled in for the undercard of the Zab Judah vs. Danny Garcia fight card on April 27th at the Barclays Center in Brooklyn, New York.

The Malignaggi-Maidana hasn’t been confirmed as of yet because there’s still a chance that Malignaggi might decide to defend his title against the World Boxing Association ordered #1 WBA challenger Diego Chavez or Malignaggi could still opt for a title-milking fight against the past his best 41-year-old Shane Mosley. Malignaggi sounded unsure when asked if he was still planning on fighting Mosley when asked last Saturday night by Showtime.

Maidana-Malignaggi is easily the best fight Malignaggi could make in terms of entertainment value for casual and hardcore boxing fans. Maidana has the power and the engine to force Malignaggi to fight for survival for 12 rounds. Maidana isn’t someone who can’t pull the trigger anymore or who will freeze up after the 2nd around and just move around the ring without throwing punches. Maidana is going to go after Malignaggi and likely give him a real beating in this fight. The only way Malignaggi wins is if he runs, jabs and holds. He’s got the hometown advantage, and that could be enough for him to get a controversial win.

However, Maidana doesn’t have Mosley’s name recognition with the casual boxing crowd, so that could potentially get in the way of the Malignaggi-Maidana fight being made. Malignaggi’s promoters at Golden Boy might choose to go with the more established fighter in Mosley if the money is right for the fight.

Maidana is an exciting fighter with excellent power, but he’s someone that you have to match carefully because there are guys that he’s just not going to do well against, such as Devon Alexander. Guys that clinch Maidana a lot are going to give him problems.

Malignaggi is clearly a step below Alexander in hand speed and power, so Maidana should do really well against him if this fight gets made. Hopefully, Golden Boy does the right thing by looking to make the more entertaining fight between Maidana and Malignaggi rather than the Mosley-Malignaggi, which promises to be a stinker of a fight.

« Burns vs. Vazquez: Ricky is going to look bad in this fight

Judah: Danny Garcia is a faker and a liar! »