Judah vs. Garcia winner must face Matthysse next, says WBC 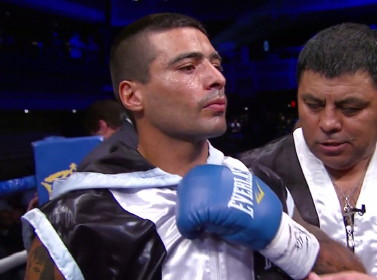 The World Boxing Council has ordered the Judah-Garcia winner to fight Matthysse in their next fight, according to fightnews.com. That’s probably not what Judah and Garcia wanted to hear because Matthysse is probably the most dangerous fighter in the 140 pound division right now, and he may be the #1 fighter at this weight.

Having to fight a red-hot Matthysse might not be what Garcia and Judah were hoping to hear because it eliminates the potential for a title milking fight or a rematch against Amir Khan.

Golden Boy Promotions want Garcia to fight Khan after the Judah fight, but the WBC is going to make this a problem for that to happen unless Golden Boy can somehow persuade them that it would be in the best interest of boxing and the WBC to allow Garcia to sidestep the more dangerous Matthysse to fight a bigger money fight against Khan.

I’m pretty sure that if Golden Boy wants Garcia to fight Khan instead of Matthysse, the WBC will likely cave in if Golden Boy can say the right words.

It’s going to look bad, though, if they do this because Khan doesn’t have a title, so the WBC can’t say they’re allowing Garcia to bypass Matthysse for a unification bout. That’s something that the promoters often do in order to avoid dangerous contenders; they look for a weak paper champion who has no business holding a title in the first place, and they match their champions against those fighters instead of the bigger threat.

With Khan, you can’t do that because he doesn’t have a strap. Unless the WBC can come up with a reason for why Garcia can skip the Matthysse fight, he’s going to have to fight him if he gets past the Judah title defense in April.

Golden Boy can also pay Matthysse a step aside payment to let Garcia face Khan, but I’m not sure if they’d willing to go that far to avoid the fight. If they’re going to do that, then they might as well have Garcia vacate his WBC title altogether so that they don’t have to worry about him at all.

« Donaire vs. Rigondeaux on April 13th