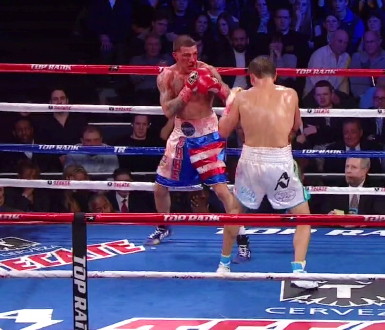 The fight was halted when Rosado’s corner threw in the towel to save Rosado, who was bleeding badly from his left eye and also bleeding from his nose. Rosado had stopped fighting back and was just running.

Rosado had talked about wanting to come and slug with Golovkin but instead of slugging, Rosado chose to run for the entire fight. He was able to land an occasional good shot, but for the most part Rosado was just moving punching bag.

Every time Rosado would stop running, he would take punishment from the much stronger and better skilled Golovkin. Rosado was cut over his left eye from a hard jab in the 2nd round and later in the fight Rosado’s nose was bloodied and might have been broken.

In the 6th round, Golovkin tagged Rosado with a huge right uppercut that sent Rosado flying backwards at the start of the round. Rosado was hurt from the shot and immediately clinched Golovin, but while in the clinch, Golovkin tagged Rosado three times with rabbit punches to the back of the head. This led to the referee Steve Smoger giving Rosado a time out to recover from the rabbit shots. It just looked like Rosado was trying to recover from getting hit hard by that initial right hand. The remainder of the round was just target practice for Golovkin, as he teed off on his running target.

Overall, it was a good performance from Golovkin but it wasn’t a great one because he had to chase Rosado around the ring and he couldn’t really show off his power. Rosado just looked like he was there to survive given that he was mostly just running and rarely throwing shots.

Rosado was pretty cut up in the fight but that’s not why he lost. He didn’t have the power or the skills to stand in there with Golovkin and he was just mostly running in a hard to watch fight. Every round was identical to each other with Golovkin stalking a running target and tagging Rosado with jabs, left hooks and right hands. It’s too bad Rosado didn’t try and make more of a fight of it because he wasted his time by running.