Roach: If Pacquiao doesn’t perform against Marquez, it might be over 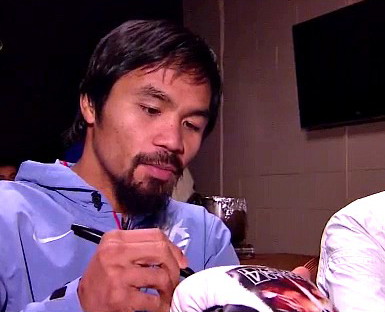 By Chris Williams: Trainer Freddie Roach is saying that if his fighter Manny Pacquiao performs poorly in his fight with Juan Manuel Marquez this Saturday in Vegas, Roach might have to pull Pacquiao aside and tell him it’s over, that he needs to retire from boxing.

Roach had that experience first-hand when he was fighter when his trainer told him it was over when he began to struggle in his fights, and Roach is now ready to do the same thing for Pacquiao if he fails to get the job done at the MGM Grand in Las Vegas, Nevada against Marquez tomorrow night.

Roach said to the New York Times “If he [Pacquiao] doesn’t go out there and do what he’s supposed to do in this fight, we’re one step closer to that [retirement] talk…It’s getting closer. If he doesn’t perform in this fight, we might have to. It might be over.”

Roach can have that talk with Pacquiao until he’s blue in the face, but if Arum doesn’t want Pacquiao to go, I think he’ll be able to convince him to stay on. What could see is Pacquiao matched up against strictly sure thing opponents that he can absolutely beat. It would be kind of like how Arum started matching Miguel Cotto with softies after his terrible beatings in losses to Antonio Margarito and Pacquiao.

Arum matched Cotto against old guys like Richardo Mayorga, a light hitter in Yuri Foreman and then a past his prime Antonio Margarito, who was coming off of a year layoff and three separate eye surgeries. If Cotto had stayed with Arum, Cotto would still be winning his fights because I can’t see Cotto fighting Floyd Mayweather Jr. or Austin Trout had he stayed.

So, I think Arum can put Pacquiao on a soft diet and a squeeze out another three years out of him, but that’ll mean no more Marquez fights and no more bouts against Tim Bradley. Even Brandon Rios might be too much for Pacquiao depending on how bad he looks against Marquez.

Brook vs. Alexander on January 19th at the Nokia Theater, in Los Angeles, CA »