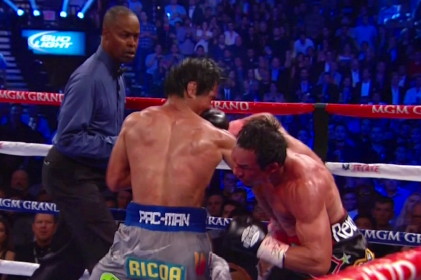 By Miguel Antonio “Miggs” Barragan: Comedian and UFC color commentator Joe Rogan has said countless times “There is no such thing as a lucky punch.” To a certain point, I think I agree with him. He stresses that if a fighter throws wild haymakers or even if he closes his eye and throws a Hail Mary, that fighter is throwing that punch with bad intentions, skill or not.

If that punch lands flush on its target and knocks out that opponent, it’s immediately considered a lucky punch. But do lucky punches even exist? I’m going to go out on a limb and say no.

As I mentioned before, if a fighter throws a punch, skill or not, technique or not, it’s being thrown to knock out their opponent, period. So why is it considered lucky when it accomplishes its mission? If anything is lucky about that punch, it’s obviously the accuracy of the punch, but not the punch itself. So by definition, there is no such thing as a lucky punch. “There is no spoon.”

Now, I’ve decided to throw in my two cents, not just to explain the above, but also in the hopes of finally putting to rest the obnoxiously irrational theory that Juan Manuel Marquez’s counter right hand knock out of Manny Pacquiao back on December 8th was a lucky punch. However, my explanation above is not the supporting argument for which I will use to drive my point home. That my friends, is all over the internet at your disposal, I will simply point the way.

But first, I would like to briefly mention a touchy subject, the countless accusations of Marquez taking performance enhancing drugs, or PEDs due to his involvement with admitted steroid distributor Angel Guillermo “Memo” Heredia. Not to mention the physical changes leading up to his fourth bout with Pacquiao. Kevin Iole of Yahoo Sports reported on December 14th, per Nevada State Athletic Commission executive director Andy Garcia Keith Kizer, both Marquez and Pacquiao passed their post fight drug scans. They were tested for performance enhancing drugs, masking agents and drugs of abuse, and all came in negative. Now, I am fully aware that both fighters were only tested the day of the fight, not prior or at random and that there are substances that cannot be detected. Thus there are plenty of opportunities for a fighter to cheat using this system of testing. Never the less, I wanted to clear the air for the record, both fighters tests came in negative per NSAC. Now, let’s move on.

The main ammunition that I will be using is and was in front of our faces the whole time, video. I will not be posting links or gifs or embedding anything, however I will point out where to look for them. First, during one of Juan Manuel’s sparring sessions prior to the bout, he was throwing down with south paw sparring partner Rocky Santillo. This video can be found on YouTube. About 35 seconds into the video, Marquez actually knocks Santillo down, an occurrence that doesn’t happen very often in sparring. Neither by using a combination nor by attacking, but by simply waiting for Santillo to throw a jab, then came back with a straight right counter. Marquez briefly bobs to his right to slip the jab then comes back to unload a straight right hand while slightly dipping his head to the outside, or to his left, and down he went.

We all know Marquez is an excellent counter puncher, this was no surprise as he showed time and time again how he had been able to catch Manny by counter punching him.

Then, there was the 5th round of their fourth bout, the round where Pacquaio landed a straight left hand, stunning Marquez and causing him to use his glove (which touched the canvas)in order to maintain balance, officially marking the knockdown. Juan Manuel beats the 10 count and continues the fight, still feeling slightly staggered but he continues. Pacquiao, knowing he had his opponent in trouble added a bit more pressure, and perhaps going in for the kill, he began attacking and throwing his trademark left hand. At about the 1:30 mark of that same round, Pacquiao lunges in for a jab and is met with a straight right hand counter that nearly spins him around like a pugilistic Black Swan. Pacquiao takes it well and in classic Pacman fashion, bangs his gloves together as if to say ok, let’s trade.

As one can see, Marquez most likely didn’t expect to be on the receiving end of a knock down, he did however expect to have Manny aggressively attack, as we have become accustomed to seeing from him. Especially after one of two scenarios, either Marquez lands a clean shot, forcing Manny to attempt retaliation, or Manny, believing Juan Manuel is hurt goes in for the kill as he’s been instructed to do by trainer Freddie Roach.

It just so happens that the latter was the case in that 5th round. In fact, that was also the case in the 6th and final round, where Manny was countered the exact same way as he was in the 5th, only to DDT himself immediately after, and in turn removing himself from his consciousness.

So now let’s take a look at that 6th round. The round starts off relatively slow, considering the intensity we witnessed in the previous round. At the 2:12 mark, Manny attempts his 1-2 combination. Marquez reads it and slips to his left, away from the power. He dips to that side but elects to not unload a punch. Perhaps a bit of a mistake, as Pacquiao notices that Juan Manuel doesn’t counter and releases a few more combos that sends Marquez on his heels. This continues until there are 10 seconds left in the round. Manny gets off a combo or two in an attempt to seal the round. Then it happened, the fight ending thunderous right hand counter that turn the lights out. This is the punch that Marquez naysayers swear up and down was luck.

Now, I’m no expert but I have been known to lace up some gloves and on the occasion, throw down with the fellas. Although I am naturally right handed, my stance is not orthodox; I use the south paw stance. I was taught this was because it was brought to my attention that it is a bit harder and quite tricky to fight southpaws since there are substantially far more right handed boxers than left handed. The angles are tricky, the movements are tricky and overall, it’s just freaking hard. One of the most basic and fundamental strategies when facing an opposite handed opponent is circle away from the power and when attacking, make sure your lead foot is on the outside of the opponent.

This also works the other way around. What works for the southpaw will also work for the orthodox fighter. This is exactly what Marquez did. In fact he did this when Manny was attacking. You remember, one of those examples I gave earlier? Marquez, a skilled counter punching tactician knew exactly what he was doing and used this specific sequence of moves. He dipped his head away from the power (to his left), stepped his lead foot on the outside and unloaded a powerful right hand counter, just as he had done in sparring and in the previous round. In fact Manny, attempting to do the same thing and step on the outside, ended up stepping on Marquez’s foot. It is this exact sequence of moves that should put to rest, once and for all, that the counter right hand of Marquez was in no way shape or form a “lucky punch”.

Now, the circumstances behind why Manny was tucked into bed in the middle of the MGM Grand Garden Arena anyone’s guess. It could’ve been anything from marital issues, to preoccupation with politics or a number of any other distractions. Perhaps it is because of his time in the sport. They say if you stay in the game long enough, it’s bound to happen. However, a “lucky punch” was absolutely not the culprit. Not to mention my earlier argument that there is no such thing to begin with.

In closing, I would like to say that I hope this closes the door on this theory for good. I realize that this atrocious knockout defeat is a hard pill to swallow for Pacquiao fans. As an avid fan of boxing, and a Mexican-American, I follow, cheer and support Mexican boxers. However, when the Mexican boxers I support get taken to school or knocked out severely, I have no choice but to accept that they were defeated by a better boxer that night. I supported Antonio Margarito when he fought Manny Pacqiuao and Miguel Cotto in the rematch. I cheered Juan Manuel Marquez against Floyd Mayweather Jr. I even rooted for Julio Cesar Chavez Jr. when he fought Sergio Martinez, but made no quarrels about knowing and flat out saying that these fighters will lose. Not only am I a fan of boxing, but I understand it quite well. This is no knock on Mannys fans or even Filipinos in general, because I understand supporting fellow countrymen. All I’m saying is that why must there be a reason or excuse behind Mannys loss not named Juan Manuel Marquez? Why else did Manny decimate every other recent opponent except Marquez? Why else would Manny want or accept a 3rd, 4th or even a 5th fight with him? Sometimes in combat sports, a fighter just has your number, maybe Marquez has Pacmans number and it just so happens that Marquez has it memorized extremely well.

« DeGale doubts Groves will ever become a world champion

Missed opportunities: Pavlik should have fought Bute when the fight was offered »