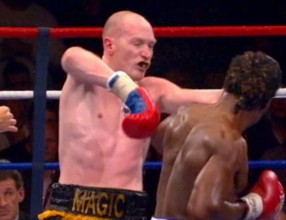 By Scott Gilfoid: Matthew Hatton (43-6-2, 17 KO’s) was recently beaten by Kell Brook in March of 2012 in a mostly one-sided 12 round unanimous decision loss that was boring to watch due to the one-sided nature of the fight. Now it looks like the 31-year-old Hatton will be receiving another beating this time against IBO welterweight champion Chris van Heerden (18-1-1, 10 KO’s) on March 2nd in Cape Town, Western Cape, South Africa.

Hatton wants to try and capture the IBO strap so that he can use this to eventually get a title shot. However, he doesn’t have the skills or the power to beat the 25-year-old southpaw van Heerden, even though he’s not that great of a fighter either when you think about it.

Van Heerden, #11 IBF, does have a couple of decent wins on his resume against Sebastian Lujan and Kaizer Mabuza. Those are couple of tough fringe contenders, and you’ve got to have some skills to beat those guys. Again, Van Heerden is still not that great of a fighter and I can’t see him beating someone like Carson Jones or other middle of the road welterweight contenders, but he’s definitely good enough to beat Hatton. Van Heerden was beaten by Nikola Stevanovic by a 12 round split decision in May 2010. That performance showed Van Heerden’s limitations as a fighter because Stevenovic isn’t anything special.

Hatton, #14 IBF, has lost two out of his last four fights and taken bad beatings in losses to Saul Alvarez and the aforementioned Kell Brook. In between those beatings, Hatton defeated Andrei Abramenka and Michael Lomax in mismatches. Hatton can still beat 3rd tier opposition, but it’s when you put him in with B level fighters is where he struggles badly, as we saw in those losses as well in his defeat against Craig Watson in May 2008.

I don’t think Van Heerden will be able to knock Hatton out because he’s a got a great chin, but I do see him winning by a lopsided 12 round decision with no problems.