Marquez vs. Pacquiao 4 on Saturday at the MGM, in Las Vegas 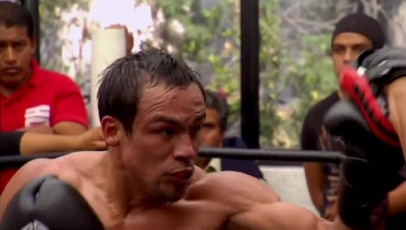 By Chris Williams: In looking at the condition of the two fighters Juan Manuel Marquez (54-6-1, 39 KO’s) and Manny Pacquiao (54-4-2, 38 KO’s) as they head into their last week before their fight next Saturday, December 8th, in Las Vegas, Nevada, I’d have to say that Marquez looks by far to be the better conditioned fighter. Not only does Marquez look in better shape, he seems dialed in mentally more for the fight, like he’s got the eye of the tiger.

In watching training video of Pacquiao going about his training sessions with Alex Ariza, Freddie Roach, and his various sparring partners, Pacquiao doesn’t look like a fighter that is mentally focused for the fight. I don’t see the aggressiveness that Roach has been looking for in the Filipino.

Roach said “I have to bring back the Manny Pacquiao with the killer instinct. I want him to go after him [Marquez] will full force, and I want him to respond with full force.”

Killer instinct? I’m still trying to remember the last time I saw Pacquiao with a killer instinct. Even in the Miguel Cotto fight, Pacquiao didn’t have the killer instinct. He let Cotto hang around for 11 rounds until getting a controversial stoppage in the 12th in a fight that shouldn’t have been stopped due to Cotto still fighting back.

The last time I saw Pacquiao with a killer instinct was against a near starved Oscar De La Hoya in 2008, but that’s not a big deal because De La Hoya went about preparing for the fight in one of the worst ways a fighter can by starving himself and going on a lean diet of buffalo meat just to get down to a weight he had no business fighting at in the first place. The Pacquiao-De La Hoya fight was won by Pacquiao just on De La Hoya’s diet for the fight. So I can’t give Pacquiao full 100% credit for being super aggressive in that fight because he didn’t have a live body in front of him that night.

Pavlik vs. Ward: Andre knows he’s going to be in tough – Kelly »