Rees vs. Murray off; Rees-Abril possible for early 2013 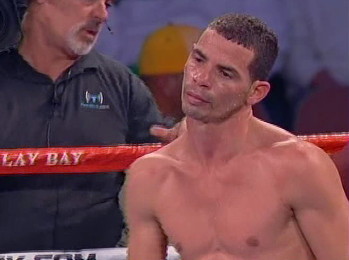 By Scott Gilfoid: The December 8th fight between Gavin Rees (37-1-1, 18 KO’s) vs. John Murray (31-2, 18 KO’s) has been canceled due to the 27-year-old Murray failing his medical exam. That’s a real bummer, I guess, because it would have been a slightly interesting bout to go along with the main event on that card between Carson Jones and Lee Purdy at the Olympia, Kensington, London, United Kingdom.

Rees will now focus on looking to get a bigger fight in 2013 against the likes of Richard Abril.

Abril will take Rees to school if that fight gets made, and the only way I see Rees winning that one is the same way Brandon Rios beat Abril by winning by an incredibly controversial decision. Abril is like another Floyd Mayweather Jr. clone with his shoulder roll defense. Rees won’t be able to lay a glove on Abril, because unlike Andre Berto, Abril knows how to use the shoulder roll and he’s very hard to hit.

A fight between Abril and Rees is a much better fight than a Murray-Rees bout, because Abril is a top fighter and not someone that is coming of consecutive losses like Murray.

Hearn will no doubt maneuver to get the Rees vs. Abril fight to take place in the UK, and that will put Abril in a position where he may need to give Rees a serious beat down in order to ensure that he comes out of there with a win. I’m hoping we don’t see any kind of controversy but I have a feeling that’s what’s going to happen. Arbil has got mad skills and is right up there with Adrien Broner in talent, but he’s been jobbed several times in losses to Breidis Prescott, Hank Lundy and Brandon Rios. I had Abril winning all three of those fights.

« Marquez: Pacquiao is predictable, not as explosive or as fast as he once was