Ricky Burns to fight Adrien Broner in in February or March next year, says Warren 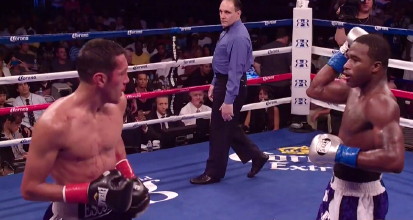 By Scott Gilfoid: British promoter Frank Warren is saying that WBO lightweight champion Ricky Burns (35-2, 10 KO’s) will be fighting unbeaten Adrien Broner (24-0, 20 KO’s) next year in February or March, provided that Burns wins his fight against a still to be determined opponent on December 15th and the 23-year-old Broner wins his next fight on November 17th against WBC lightweight champion Antonio DeMarco at the Boardwalk Hall, in Atlantic City, New Jersey.

Warren said in his column at frankwarren.com “Provided that Rickster [Burns] prevails [in December 15 fight], I have an understanding with Golden Boy [Broner’s promoters] for him to lock horns with white hot U.S hope Adrien Broner in late February or March.”

The chances are high that Broner will defeat DeMarco to take his World Boxing Council strap, and be ready to fight Burns in early next year, if Warren is serious about wanting to put Burns in with the unbeaten American talent Broner. I’m not holding by breath waiting for this to happen because Burns had his chance to fight Broner before and instead he skedaddled up to the lightweight division after vacating his WBO super featherweight title first. I see Burns choosing not to take the unification fight with Broner, and instead continuing to fight guys like Kevin Mitchell and such.

Warren still has to find an opponent for Burns to fight on December 15th. He’s talking about wanting to get a top 10 opponent, but had no luck recently in getting #8 WBO Gavin Rees to take the fight. Rees’ promoter Eddie Hearn described the offer made to Rees as “Horrendous offer”, with the money not being what he wanted. With Rees out, it’s highly likely that 2nd tier fighter John Murray will get selected to fight Burns.

Of course, that would mean that Burns won’t be fighting a top 10 opponent, but I never really expected him to fight a top 10 guy anyway. If Burns does fight a top 10 contender, it’ll likely be #7 WBO Ji-Hoon Kim. There’s a lot of other contenders that aren’t ranked by the WBO that would be interesting for Burns, such as Hank Lundy, Lenny Zappavigna, Mercito Gesta, Reyes Sanchez, and Rene Gonzalez, but I don’t see any of those guys getting selected.

« Amir Khan and his future

Who will replace Manny Pacquiao? »