Deontay Wilder to have to deal with McCreary’s quick hands 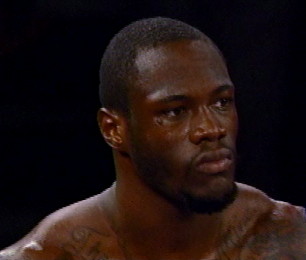 By Scott Gilfoid: Unbeaten heavyweight prospect Deontay Wilder (24-0, 24 KO’s) will be facing the speedy unbeaten Damon McCreary (14-0, 10 KO’s) in a 10 round bout at The Hangar, Costa Mesa, California. This is a good match-up for the 26-year-old Wilder, because he can learn a lot from this fight due to McCreary’s fast hands and slick boxing skills.

This guy is definitely the best opponent that Wilder has ever faced and it should give him some things to learn from before it’s over.

Wilder’s co-trainer Jay Deas said to tuscaloosanews.com “He’s [McCreary] got real fast hands, and he’s real slick. He looked like a guy that’s well schooled…There is no question that he knows how to fight. I don’t think he’s been hit as hard as he’s going to get hit.”

Yes, McCreary’s slickness and fast hands will disappear once Wilder lands his first clean right hand. With Wilder, it only takes one good shot and the fights over. That’s a testament to his incredible power in his right hand, as well as his left. The left hand is a new weapon for him and it’s already surprising a lot of people who previously thought that all Wilder had going for him was that howitzer of a right hand. But he’s now added a left and it makes him a dual threat now to knock his opponents out.

Wilder will be fighting twice in September in order to stay busy and keep progressing. It’s still unknown right now who his opponent will be after the McCreary fight.

On the 16th of next month, Wilder will joint with Audley Harrison’s training camp to start working with him to get him ready for his October 13th fight against British heavyweight champion David Price at the Echo Arena in Liverpool, England. The sparring with Harrison should be valuable for Wilder, as it’ll get him used to fighting guys his own size and it’ll also help him due to the different skills that Harrison has going for him. It should be a good learning tool for Wilder.

Nathan Cleverly vs. Denis Simcic next? »