Will Anthony Joshua keep improving or is this as good as he gets? 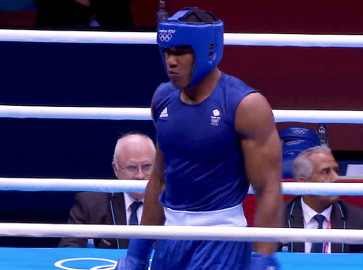 By William Mackay: After winning the 2012 Olympic super heavyweight boxing gold medal, Britain’s Anthony Joshua is still seen as a work in progress by many boxing fans. They point out the reason why Joshua struggled through the Olympic competition and won several questionable decisions along the way was because Joshua has been boxing for only four years. The problem here is that a lot of Joshua’s competition in the Olympics were about the same age as him at 22, and if Joshua gets better you got to imagine the guys he competed against will get better as well. Joshua’s wins over Erislandy Savon, Ivan Dychko and Roberto Cammerelle were highly questionable ones. Savon and Dychko are both only 22.

Hopefully, Joshua can keep improving because if this as good it gets from him then I’m afraid Joshua won’t go far in the sport outside of the amateur game. Joshua reminds me a lot of journeyman Jameel McCline with the way he fights.

Like McCline, Joshua fights flat-footed, lacks power, throws arm punches, and is very predictable in the ring. It’s good that Joshua won the Olympic gold medal, and I guess it doesn’t matter how he won it, but he can’t just exist on questionable decisions. Joshua has got to improve because he won’t be able to make a career out of receiving decisions in fights that people think he should have lost. If Joshua can’t improve to where he’s clearly winning his fights then he’s probably going to end up as a journeyman at some point.

Joshua is only 22, so there’s a possibility that he could improve in the future in time. However, there’s also a chance that this is as good it gets for him. One thing that may keep him from improving much is that he’s a hulking fighter carrying a lot of muscle and it seems to make him very rigid, and slow.

At 22, a fighter is usually at his quickest, and if the mobility and speed isn’t there at this point in his game it never will be. If you look at Wladimir Klitschko when he was 22, he was a lot faster and he moved a lot better than he did when he was in his mid-20s. He still moved well, but he wasn’t as quick on his feet as he was when he was 22. It’s hard to imagine seeing Joshua getting any faster at this point. If anything, it’s going to be a slow downhill process for him in terms of speed and his ability to move around the ring.