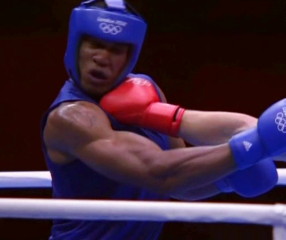 By Scott Gilfoid: In looking around at some of the general comments I’m seeing around the internet about British super heavyweight Anthony Joshua’s questionable gold medial decision victory over Italy’s Roberto Cammarelle earlier today on Sunday in Joshua’s home country of England, it appears that not too many boxing fans feel that the 22-year-old Joshua really deserved to get the decision. They pretty much unanimously see Joshua having lost to Cammarelle today. I think that kind of taints Joshua’s victory, doesn’t it?

This makes two HIGHLY controversial decisions that Joshua received while fighting at home in London in the 2012 Olympic. His first win over Cuban Erislandy Savon and his win today over Roberto Cammarelle both looked like clear losses for Joshua.

Oh, I’m sure that Joshua can count on his fellow Brits to back him in his victory, but I’m not seeing too many boxing fans from around the world who believe that Joshua really deserved the win. That’s the true test of whether a fighter deserved to get a decision. If fans outside of Joshua’s home country thought he deserved to lose then that’s pretty much how you have to see it, because naturally a fairly large portion of his fellow Brits are going to back him just out of patriotism. There’s nothing wrong with that, but to get clearer picture I think you have to look at what other fans from other countries are saying about the Joshua-Cammarelle results, and it looks like people are pretty much saying that Cammarelle won the fight. What can you do. The people have spoken and it looks like the wrong fighter got his hand raised today.

If you look at the fight in a objective manner, it appears that the Italian Cammarelle clearly deserved to win the fight. The judges scored it 18-18 and gave Joshua the victory after a tiebreaker count back, but it just looked like Joshua got dominated and shouldn’t have even been in the position where it was a tie at the end of the fight. Joshua went into the last round trailing by a 13-10 score, and somehow came even at 18-18 despite Cammarelle doing the better work in the round.

For me, if I won a gold medal that I felt I didn’t deserve I’d give it back to the Olympic committee and tell them ‘no thanks.’ I wouldn’t accept the medal. I think Joshua should do that or maybe given the gold medal directly to Cammarelle so that he can go home to Italy with it around his neck to show countryman.