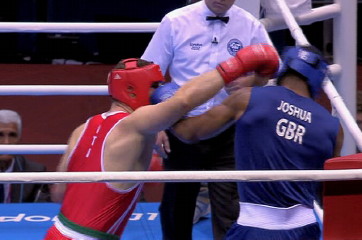 There’s honestly no comparison. If you check out Harrison’s four Olympic wins in winning the gold medal in 2000, he looked a heck of a lot better than Joshua. Not only did he look a lot smoother and better at getting his punches off, but Harrison dominated pretty much everyone he fought in that years’ Olympics. There wasn’t one fight that you could call controversial for Harrsion. Simply put, Harrison dominated the competition that year. I wish I could say the same for Joshua.

In contrast, here are Anthony Joshua’s four fights in the 2012 Olympics:

Of those four fights, I had Joshua losing to Savon, Dychko and Cammarelle and fighting to a tie against Zhang. Joshua wasn’t impressive at all in the 2012 Olympics and is really, really, really lucky to have gotten the nod in those three fights.

Joshua looks strong and he’s definitely huge in size at 6’6″, but he’s slow, fights flat footed, throws arm punches and and looks clumsy. His defense isn’t there, he doesn’t have a left hook, his right hand wasn’t as powerful as the other top fighters in the Olympics, and he doesn’t throw combinations. His jab is his best weapon, but he gives up his height too easily and doesn’t have a good inside game.

Joshua may have won the gold medal in the 2012 Olympics, but he did in controversy and his skills showed that he’s going to likely have problems as he enters the pro game. He’s not going to be able to get controversial decisions each time he fights, and he’s going to have to come out of England at some point or another. I think he’s going to have major problems because he’s not really gifted in any one area like other heavyweights. With the Klitschkos you can point to their power and size. With Joshua, all you can look at is his size. He doesn’t have the movement, speed, punch arsenal or power of a Wladimir Klitschko. Heck, he doesn’t even match up well with guys in his own country like David Price, David Haye, Dereck Chisora and Tyson Fury.

Harrison may not have had a good pro career but he was a lot better in the 2000 Olympics than Joshua was in the 2012 Olympics. Does that mean that Joshua will end up like Harrison? It’s possible. Joshua doesn’t move as well, he doesn’t throw combinations as good as Harrison, and he’s not as fast as him either.

We don’t know what Joshua’s chin is like, but I can see that he fights flat footed and isn’t a big puncher. To me, Harrison looks to me to be the much better heavyweight if you compare the two fighters in how they looked in their two separate Olympics. It’s definitely not a good sign that Joshua is struggling even now and getting decisions that many boxing fans felt that he lost. Like I said, I felt Joshua lost three out of his four fights in this year’s Olympics and fought to a draw in another fight. Since I don’t see any of the fighters in this years’ Olympics as being potentially great heavyweights, it shows that Joshua is going to likely have major problems as he enters the pro game and starts facing quality opposition at some point.

Unless Joshua improves in a major way, which I kind of doubt given his huge size and lack of mobility, I see him just being one of the many contenders that hang around the heavyweight division for years without winning a title.