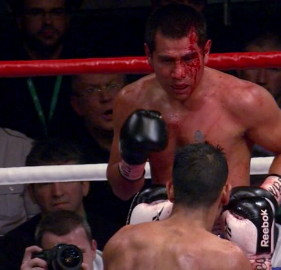 By William Mackay: Former three division world champion Marco Antonio Barrera (67-7, 44 KO’s) is interested in avenging his defeat at the hands of Amir Khan from 2009 before retiring from the sport. Barrera, now 38, is still bothered that he lost by a 5th round technical decision to Khan in a fight where Barrera was cut badly from a headbutt in the opening round and the fight was allowed to go on just long enough for it not to be called a no contest.

The cut was the same from the moment it started and he didn’t understand why the fight was allowed to continue until Khan could get a win. Barrera couldn’t see after getting cut high on the forehead and was basically fighting blind from that moment on until the fight was stopped in the 5th.

Barrera told Sky Sports Ringside “I feel very sad that I fought Amir Khan with the cut and I want one more fight to prove who I am. Amir Khan never fought with me; he only hit me with his head. He just needed my name but he never fought with me. I don’t think Khan can be a great champion…No contest should have been the decision.”

Yes, of course, Barrera didn’t get a rematch, even though the win was completely tainted by the cut. Khan doesn’t give guys rematches when he beats them, so why would he break that pattern for Barrera? He’s fighting Lamont Peterson again only because he got beat by him. But do you honestly think that Khan will give Peterson a rematch if he beats him in their rematch on May 19th? I sure don’t. Even if Khan wins by the slimmest margin possible, I can’t see him facing Peterson again. As long as he gets the win, Peterson is probably history. Khan won’t fight Barrera now because he’s already got his scalp added to his resume. It was worthless one because the win was tainted due to Barrera having to fight with blood dripping into his eyes the entire fight and with the fight being halted in the 5th round.

They may have called a win for Khan, but he didn’t get a lot of credit for the victory because of Barrera being nearly crippled due to the cut and because of the early stoppage. It was like an asterisk victory in my view and it’s very sad that Khan didn’t give Barrera a rematch because the fight proved nothing. But as far as Barrera getting a rematch with Khan now, you can forget about it because it’s not going to happen. Barrera has only fought twice since then and has been out of the ring since last year in February.