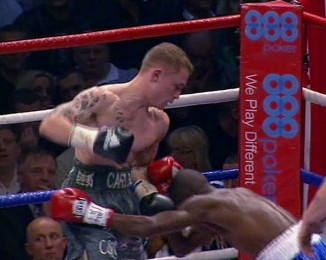 By William Mackay: In what turned out to be a sickening mismatch, Commonwealth super bantamweight champion Carl Frampton (13-0, 9 KO’s) completely destroyed his badly overmatched opponent Prosper Ankrah (18-3, 13 KO’s) from Ghana in a 2nd round TKO last Saturday night at the Motorpoint Arena, Sheffield, Yorkshire, United Kingdom.

In the opening round, the tank-like Frampton stalked the much lighter looking Ankrah around the ring looking to land power shots. Ankrah circled the ring cautiously, jabbing Frampton frequently but having little look in slowing down his forward progress. Frampton landed some good 1-2 combinations and roughed Ankrah up, pushing his head down hard on a couple of occasions when they came in close. The round was all Frampton with him landing some nice power shots, while Ankrah looked to be just trying to keep away.

In the 2nd round, Ankrah continued to jab and move around the ring in circles. His power, such as it was, had zero effect on Frampton, who looked like a short lightweight fighting against a super bantamweight. Finally, Frampton caught up to Ankrah and landed a chopping right hand rabbit punch to the back of Ankrah’s head followed by a short left hand while Ankrah was already on his way down to the canvas. After the count of eight, Ankrah tried to get up but was unable to make it to his feet and the fight was stopped.

After the fight, Frampton said he wants to take on Scott Quigg if he’ll agree to a fight.

Ankrah pretty much never had a chance due to his lack of quality experience on his resume, and sure enough, he blasted out by a beautiful chopping right hand rabbit punch from Frampton to the back of the head followed by a parting left hand shot while Ankrah was on the way down to the canvas. The fight was halted by referee Howard John Foster at 2:45 of the round. It’s too bad Foster didn’t see the rabbit punch because he might have given Ankrah another chance by waiving off the knockdown, but in the large scheme of things it really didn’t matter all that much because Ankrah was going to lose anyway no matter how many chances he could have gotten in theory.

What jumps out at you when you look at Ankrah’s resume is that out of the 18 wins on his resume, only one of the wins have come against a fighter with a winning record. That’s kind of jarring when you think about it, because how can a fighter be challenging for a title – any kind of title – when he’s only beaten one fighter with a winning record during his career? It’s pretty sad when you’ve got a champion like Frampton facing a guy who’d only fought three fighters with winning records in his career and two of them had stopped him. Great match-making on Frampton’s promoter’s part, I guess you could say but not good for boxing fans looking for competitive match-ups and a realistic view of how good or not so good Frampton is as a fighter.

One thing I noticed in looking at Frampton and Ankrah was how much bigger Frampton was in size compared to Ankrah. My guess is Frampton might have had a weight advantage of 15 pounds at the least when the two fighters stepped into the ring. I’d be curious to know how much heavier Frampton was compared to the slender Ankrah because he certainly looked a lot bigger than him by a significant margin.

« Juan Manuel Marquez vs. Brandon Rios in the works for July 14th