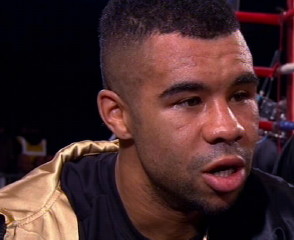 Right now, Quigg, 23, is considered by a lot of Brits as being the best with 24-year-old Frampton considered being the 2nd best of the bunch. However, Munroe, 31, still sees himself as the best guy at the weight in the UK and he’s ready to prove it by facing either of them in 2012 and taking their domestic level titles.

I wasn’t too impressed with any of them to tell you the truth. They all looked awful in their recent performances, but if I was to pick the best fighter of the bunch I would go with Munroe by far. He’s got a lot more technical and athletic ability compared to Quigg and Frampton.

Quigg looked especially awful in beating Jamie Arthur last weekend and getting dropped. Quigg was just leaning forward without head movement and just throwing shots. Of course, Arthur took advantage of Quigg’s nonexistent defense by nailing him at every opportunity, and I thought Arthur (18-6, 4 KO’s) was the bigger puncher of the two fighters.

Quigg isn’t a real puncher and instead gets over by throwing a lot of shots and usually having a good enough chin to take the incoming punches. But the way he just stands in front of his opponents leaning forward, it’s like just begging to get hit in the grill. Munroe would be all over that and would give him a royal beating.

Frampton to me looks like a poor man’s Ricky Hatton. He fights in the same style but less graceful and a lot less powerful. Munroe would take advantage of Frampton’s limited height and reach and would give him a real pounding.

Unfortunately, I don’t see Frampton or Quigg’s management letting them fight Munroe. They make talk a good game but when it comes to putting pen on paper to sign for a fight with Munroe, they’ll be so gone. Instead of fighting Munroe, we’ll likely continue to see them fight the little known domestic level opposition they’ve been fighting all along to further build up their inflated records.

« David Haye between a rock and a hard place