Frampton could have problems against Hughes 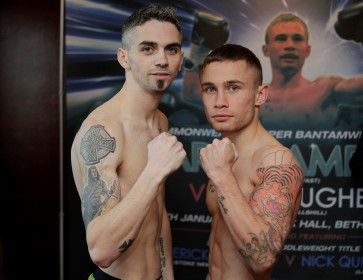 By Scott Gilfoid: I’ve taken a good look at what Commonwealth super bantamweight champion Carl “The Jackal” Frampton (11-0, 7 KO’s) is up against tonight in dealing with the lurch-like 5’11” Kris Hughes (15-1, 1 KO’s) and I think there’s a good possibility we may see an upset here with Hughes taking home the Commonwealth strap at the end of the night at the York Hall in Bethnal Green, London, UK.

Frampton is very, very basic in what he does in the ring. He’s all about throwing wild right hands and his left arm might as well be a vestigial feature because he can’t use it with any power whatsoever. The 5’5” Frampton will be giving away six inches in height and probably about the same in reach against the incredibly tall Hughes. But what I like about Hughes is the guy has got really fast hands and he’s good at throwing looping shots that his opponents can’t track very well due to the speed and the length of his arms.

And Hughes also has an excellent double and triple hook that he likes to throw with either hand. From what I can see of him, Hughes is just all around much better skilled fighter than Frampton. I hate to drizzle all over the Frampton loyalists but the guy looks inferior to Hughes in size, speed and technique.

The southpaw Hughes can use both hands and is just as comfortable punching with right hand as he is his left. I think “The Jackal” is going to have his backside handed to him on a silver platter by Hughes tonight because this guy so much more advanced than Frampton that it’s not even funny. Frampton is going to be eating a lot of punches tonight and it might get kind of messy for him in this one before it’s halted.

Kessler-Stieglitz: Mikkel will have major problems in this fight »