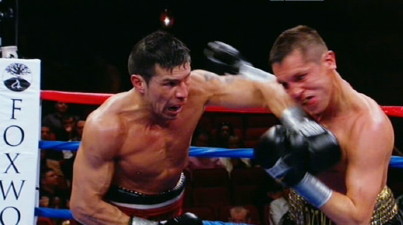 By Allen Fox: If WBA/WBC super middleweight champion Andre Ward (25-0, 13 KO’s) is looking for a big time challenge in 2012, he might to consider taking a fight against former WBC middleweight champion Sergio Martinez (48-2-2, 27 KO’s), who reportedly is willing to move up in weight to face the 27-year-old Ward at 168lbs next year.

Martinez, 36, is looking for some big fights and came up empty in his hopes of getting a title fight against WBC middleweight champion Julio Cesar Chavez Jr. That would have been a good paying bout for Martinez, not to mention a fight that would really increase Martinez’s notoriety among casual boxing fans. But Chavez Jr. is being allowed to fight Marco Antonio Rubio next and Martinez has run out of patience.

Martinez is talking about leaving HBO for Showtime, which would work out perfectly for a fight against Ward, because he has a contract for his fights to be televised on Showtime. Martinez’s next fight is scheduled for March 17th next year against Matthew Macklin at Madison Square Garden in New York.

This isn’t a huge fight for Martinez but about the best he could get right now. Macklin is a decent fighter and should make it interesting for as long as it lasts. However, Ward is a level above Macklin and the last fighter that Martinez beat in Darren Barker.

At 5’10”, Martinez might have problems with the 6’0” Ward and would have even bigger problems with his superior hand speed. Martinez is used to being the faster guy in his bouts but he would to figure out how to handle a quicker and younger fighter like Ward.

Things could go bad for Martinez if he can’t hurt Ward, because he’s not a really good inside fighter and that’s likely where Ward would be taking the to Martinez.