Vitali Klitschko may defend in Kiev against Valuev 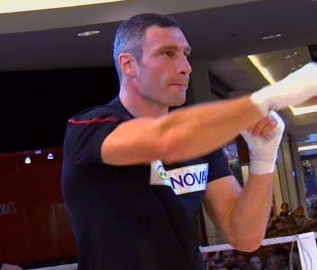 By John F. McKenna (McJack): World Boxing Council (WBC) heavyweight champion Vitali Klitschko (43-2, 40 KO’s) earlier this week denied that he was going to retire after one or two more fights. Now “Dr. Ironfist” is toying with the idea of defending his title against Russian giant former World Boxing Association (WBA) heavyweight champion Nikolai Valuev (50-2-1, 34 KO’s) in Kiev in 2012. The fight would coincide with Ukraine co-hosting the 2012 European Football Championships.

Vitali easily defeated challenger Tomasz Adamek (44-2, 28 KO’s) on September 10 scoring an impressive 10 round TKO. Since defeating Adamek there has been much speculation as to who Klitschko’s next opponent will be. The Den Newspaper quoted K-2 Promotions representative Alexsander Krasyuk as saying:

“There is a real opportunity for the Klitschko brothers to fight in Ukraine, and such negotiations are already underway.

“The battle could be held next year, perhaps before Euro 2012, Nikolai Valuev seems the most likely opponent.”

The 38 year old Valuev has been away from the ring since losing his WBA title by decision to David Haye in 2009. Since that time he has dealt with a series of injuries, but recently has contemplated a return to the ring. In mid September it was reported that Valuev was on an expedition to track down Yeti in a remote area of Siberia. With his long hiatus from the ring it is likely that Valuev will require a tune up fight in January or February of 2012.

Vitali Klitschko has not fought in Ukraine since 1998 and it is almost certain that he will be given a heroes welcome upon his return to his homeland, where he is also a popular political figure.

Although he announced his retirement on October 13 it has been rumored that David Haye could also be a possible future opponent of Vitali sometime in 2012. In his book “Making Haye”, David left the door open for a possible return to the ring to fight Vitali.

The advantage David Haye has regarding a fight with Vitali is that “The Hayemaker” is fully aware of how much Klitschko wants to fight him. Klitschko is still furious at some of Haye’s antics in the lead up to the fight with his brother Vladimir in July. Vitali has made no secret of his desire to settle the score with Haye.