Bradley wants Pacquiao or Mayweather next 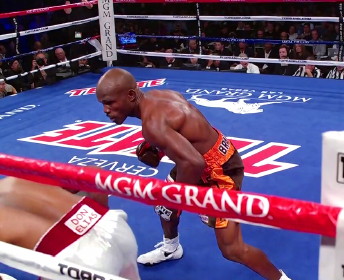 By William Mackay: WBO light welterweight champion Timothy Bradley (28-0, 12 KO’s) wants the best opponent possible for his next fight under Top Rank Promotions. Bradley defeated 40-year-old Joel Casamayor by an 8th round TKO on the undercard of the Manny Pacquiao vs. Juan Manuel Marquez fight earlier this month on November 12th in Bradley’s first fight with Top Rank.

Bradley now wants to fight either Pacquiao or Floyd Mayweather Jr. for his next fight. While the chances of a fight against Mayweather are slim and none, Bradley could end up being the backup plan for Pacquiao if he’s unable to line up a fight with Mayweather or a rematch with Marquez.

Either way, Bradley is going to get his shot at a big payday fight against Pacquiao in the very near future now that he’s with Top Rank. Bob Arum has run out of fighters in the Top Rank stable to match against Pacquiao, and with the new signing of Bradley, it gives Arum one more guy for an in house fight. However, it might be a little too soon for the Bradley-Pacquiao fight to be made.

Bradley needs at least one to two more high visible fights before a Bradley vs. Pacquiao fight would be an interesting one for boxing fans. Arum didn’t help Bradley’s case any by matching him up against the 40-year-old southpaw Casamayor.

I’m sure Arum wish he could take that one back, because Casamayor did little other than clinch all night against Bradley, and the fight wasn’t impressive to watch. Arum obviously wanted to put Bradey in a fight where he would have little problems winning by putting him in with an over the hill fighter like Casamayor. However, Arum should have at least put Bradley in with a younger guy that would come to fight instead of just clinching.

The fight was a step backwards for Bradley, because few boxing fans came away from watching that one thinking Bradley is a good choice to be put in with Pacquiao now. What Arum needs to do is find an all action guy like Ajose Olusegun and put Bradley in with him so he can really shine.

However, it’s doubtful that Arum would want to take the risk of having Bradley fight a guy like Olusegun, because it would literally be a toss-up fight. Bradley is a good fighter but he’s limited due to his lack of size, hand speed and power. Olusegun would be a lot of problems for him due to his all-out style of fighting and his high work rate But never the less, Bradley needs a couple of good fights before he’s put in with Pacquiao if Arum wants to maximize the pay per view purchases.

The problem is Bradley may not get that time if Mayweather or Marquez opt not to fight Pacquiao next. That’ll leave only Bradley, and of course he’ll lose. But at least he’ll get a good payday in getting beaten.

« Hatton: David Haye would beat Wladimir in a rematch